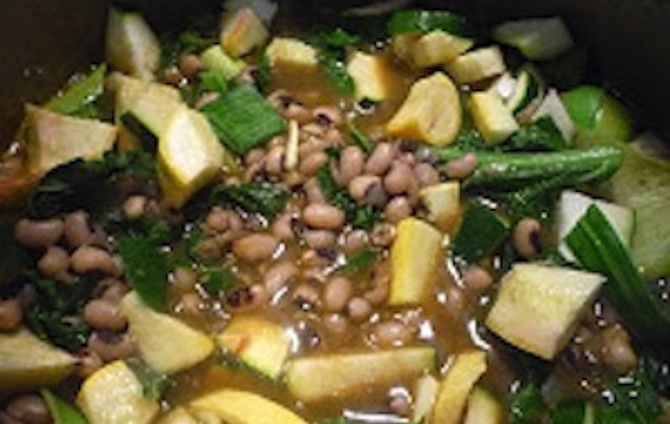 I didn’t realize this at the time, but Black-Eyed Pea soups are a traditional way to ring in New Years Day. To kick-off 2013, here is a delicious and healthy recipe that you can enjoy today.

Although I am not the biggest fan of the winter, it is a great time to experiment with soups and especially those that are filing enough to pass off as a meal. With that in mind I wanted to create a bean soup where I started out with one single ingredient — dry black-eyed peas. I have tried this tasty little bean in various dishes, but never used it in a soup. With that part down, I wasn’t sure if I wanted to use  kale or spinach or collard greens as the green veggie, but opted to use kale since this was also an ingredient that I haven’t cooked with all that much. I also added more veggies (squash, leeks, carrots, and beets) some onions, garlic, salt and pepper. What resulted was a hearty and tasty winter soup that took virtually no time to prepare and cook and is even versatile enough to be substituted for any veggies or another bean based on your preference. Here’s the quick and easy black-eyed pea and veggie soup recipe: 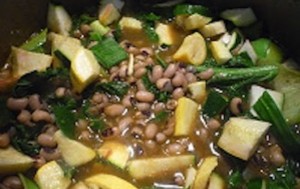 P.S. There isn’t much that could go wrong with this simple and hearty winter soup. And as I mentioned vary up the veggies or trying out other beans for a different tastes. Either way you will enjoy this hearty soup that is sure to fill you up on those cold winter nights.