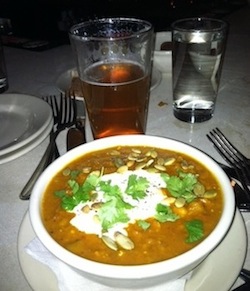 Braving the ice and blistering cold, my husband and I ventured out for the night to warm up at the bar at Sonny’s. Upon our arrival, we felt like we had found one of the best night spots in town. The room was crowded and the energy was great with locals unwinding and relaxing. Sonny’s occupies the space that was once Portland Savings Bank constructed in the late 1800’s. Sonny’s managed to keep much of the historic character and architecture of the bank with high ceilings, exposed brick, large picture windows, and the original bank vault now used as the wine cellar. The bar is spacious with plenty of seating in addition to the restaurant itself. Also, there is seating outside on the patio in the summer which overlooks Post Office Park where you’ll find a variety of entertainment on any given day.

Sonny’s is chef/owner Jay Villani’s second restaurant venture in Portland after opening the successful Local 188 on Congress Street about a decade ago. Sonny’s concentrates on offering farm to table New World cuisine influenced by Central South America and the southwest U.S.

Bartender, Christine Klein, is the force behind some amazing infused alcohols. Some of her creations include strawberry and jalapeno vodka, cranberry and pear vodka, and lemon and tarragon Tanqueray Gin. My husband started with a local beer and I ordered the Pink Stiletto with vodka, pink guava juice, lime, and St. Germain served up. It was delicious!  Sonny’s offers a nice selection of wines from California, Chile, and Argentina that compliment their New World cuisine and plenty of local beers as well.

However, it was time to get serious and try some soup. We were brought the two soups of the night, a vegetarian Harira, a Moroccan style chickpea stew and Mountain Chili Con Carne. Both soups were created by chef Johnny Walker, and yes, he was as cool as his name implies. Johnny has worked in restaurants all over the country and uses these influences to create the New World “street food”, as he calls it, at Sonny’s. He’ll find recipes he likes and confidently adds his own twist as he did with the harira. The chickpea stew was outstanding! It had layer upon layer of flavor. The base of the soup is onions, tomatoes, and garlic brightened up with golden raisins, apricots, sweet potato, red lentils, and coconut milk. It gets spiced with cumin, paprika, and coriander and cardamom that lends a perfume essence to the stew. Johnny also added some habenero pepper to take the flavor even deeper. The soup was garnished with a coconut sour cream, pepitas and cilantro. The flavors were balanced so well with sweet from the raisins and apricots and spicy from the cumin and habenero. Everything about this soup worked. Johnny said the soup can be made more substantial if lamb were added to it.

Next we moved onto the chili. Johnny starts by braising a brisket for several hours in his own liquid creation of dark rum, guava juice, lime juice, garlic, Worcestershire sauce, and figs. For the chili, he used tomatoes, onion, garlic, figs, black eyed peas, Bunker beer, coffee and brown sugar. He spiced it up with some dry ancho and chipotle chilies, cinnamon, coriander and nutmeg. The chili is dark in color and rich in flavor. The brisket is fork tender and really holds its own flavor in the chili. It was a hearty dish that was a meal in itself when eaten with a side of bread or tortilla chips.

Even though we were starting to get full some other offerings on the menu caught our eye and we had to try them. We tried the Chili Relleno which was a roasted poblano pepper stuffed with pork belly, queso blanco cheese and finished with a salsa roja (which is a Mexican red sauce) for $10. This dish was delicious! The flavors were so clean and fresh. Each ingredient lends its own balance with flavor, texture, and eye appeal. We sampled the house made lobster rangoons ($13) as well. These deep friend, flavorful envelopes were filled with Maine lobster and ginger cream cheese served with a sweet chili dipping sauce, need I say more?

Sonny’s dynamic atmosphere, creative drinks, and reasonably priced food make it the perfect stop for a night on the town. Owner Jay Villani and his business partners are looking forward to opening their newest venture called Salvage BBQ, on Congress Street, sometime later this year. Based on Villani’s successes in restaurants, I’m sure Salvage BBQ will find it’s own niche in Portland as well.