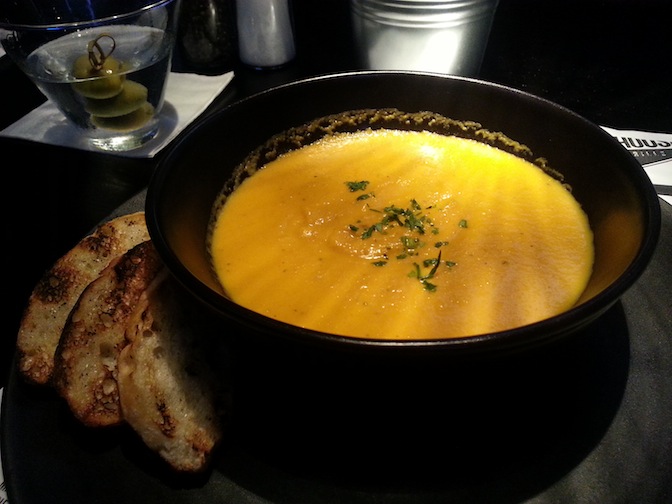 There are 17 screens showing the Red Sox game; either that’s going to make you happy or it’s not, but what will make you happy—definitely, and happier than you’ve been for a while—is the fried clam chowder at The Warehouse in Boston’s Financial District.

The place has been up and running for five weeks and already it’s attracting a vibrant crowd. When we arrive at seven, the place is packed with stylish professionals blowing off steam (it’s the middle of the government shutdown, so I imagine there’s a lot of steam to blow off). My dining companion orders wine; I order a “Drunken Soldier,” a very dirty vodka martini with a pepperoncini kick. It’s a grand way to start off the evening.

The soup special—which changes every three or four days—is a braised apple and carrot bisque. As butternut squash begins its annual march across the menus, it’s nice to see an alternative fall soup so creative and delicious. A chicken base combines apples and carrots into a purée that balances sweet, savory, tart, and aromatic perfectly. It tastes like apple; it tastes like carrots; it tastes like both at once, with top notes of nutmeg, and a hint of cinnamon sneaking in at the end. Whoever made this knows how to make a soup.

That “whoever” is chef Nathaniel Durost, who takes a break from a very busy kitchen to drop some soup wisdom and grace us with his brilliant smile and easygoing energy. Where some chefs greet the idea of soup with a sniff and a shrug, Durost figures that “if you can’t make a good soup, you shouldn’t be cooking.” Indeed, his culinary education began, day one, with a class in “Stock, Sauces, and Soups,” and he still considers that class the most important he took. After six years at Stephanie’s on Newbury Street, he was lured to Boston’s other downtown, to this sleek-but-casual bar and grill where, on Friday and Saturday nights, they push the tables out of the way, crank up the music and let people shake, shake, shake it. 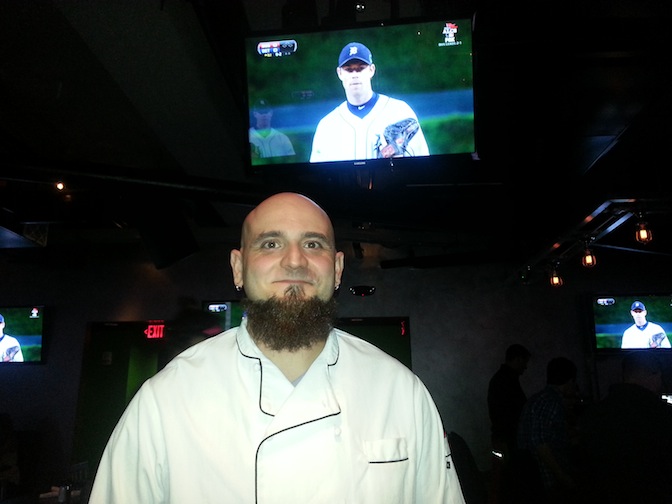 This, however, is a Wednesday, and it’s the top of what will prove to be a very long second inning. As our boys struggle on those seventeen screens (all sporting beards in honor, I decide, of Chef Nathaniel’s own magnificent specimen), the crowd at Warehouse experiences a turnover to a more casual, flannel-clad set, the new denizens of the burgeoning residential downtown. After-work boîte and neighborhood hangout and weekend dance bar is a pretty clever combination. The locals seem to agree, and have come tonight for the great drinks, great food, and, of course, the annual Boston ritual of self-torture known as the playoffs.

If comfort is needed (and, this particular Wednesday, it certainly is), Chef Nathaniel’s other offering, Fried Clam Chowder, is better than a box of puppies. The moment the bowl arrives, we know there’s something different going on. Rising from—no, seemingly hovering above—a pool of ivory broth is a generous heap of fried clams. The aroma is classic New England—butter, onions, bacon (“I put a lot of bacon in there,” smiles Chef Nathaniel), and, of course, the clams. I take a spoon of the broth, and can’t stop myself from going back in for another, and another. But wait—where are the little cubes of potato? There have to be little cubes of potato, right? 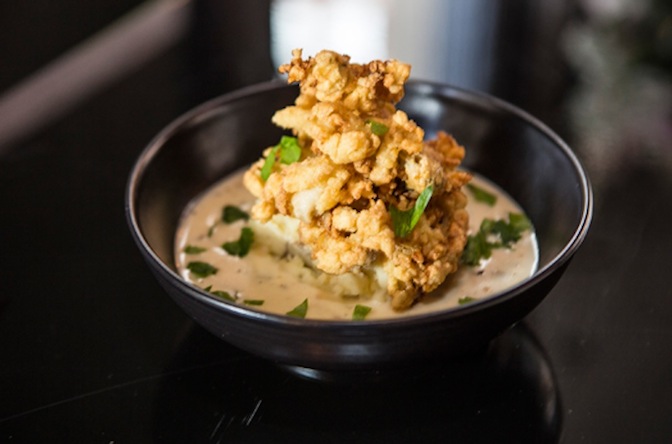 No. There don’t. Forget all that hooey about little cubes of potato. Because Chef Nathaniel is going to teach us something now, and we must pay heed. That something is mashed Yukon Gold potatoes, a reef of delicious, perfectly seasoned, perfectly mashed spuds, hidden beneath the tidal pool of his perfect bacon-butter-onion-clam broth. That’s how he gives us not only potato, but potato that heals. That’s how he does the hovering-pile-of-clams trick, how he keeps the wonderful, crunchy, tender, sweet clams crisp, ready for a quick dunk in the pool, a quick swipe through the potatoes, and a quick trip to a waiting mouth that will, for a moment, forget those five runs scored in that very long second inning, and smile, and smile, and smile.