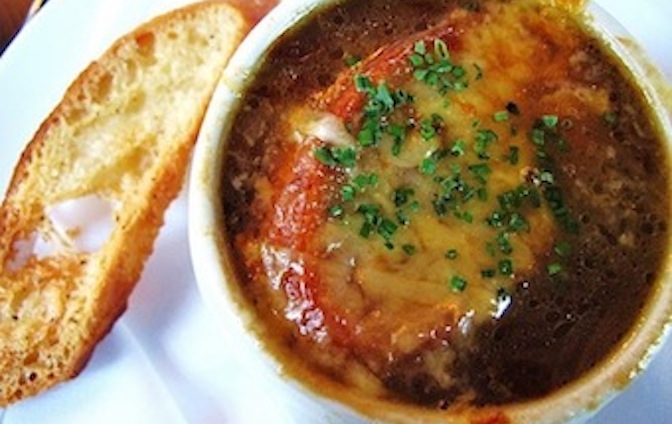 On a dreary and chilly Boston September day, the folks at What’s the Soup sent me to check in and report back on the soup scene at Deuxave, located at the corners of Mass Ave. and Comm Ave. in Boston’s Back Bay neighborhood. I hadn’t had the pleasure of dining at Deuxave before and was looking forward to dipping my soup spoon into their 9-Hour French Onion Soup.

When I arrived, I snagged a plush seat in their trendy bar and placed my order for the soup. Within minutes, a foiled round of creamy French butter was set before me and a warm roll that crackled when torn was all mine. It wasn’t long before a crock of steaming soup was in front of me, its cheese blanketing the top and hiding the deliciously rich broth of buttery soft onions that were underneath.

Within my first few bites, it was the obvious that there was so much time and attention that went into the making of this soup. The broth had bold, beefy flavors and was skimmed thoroughly and properly throughout the cooking process, leaving a flawlessly deep, golden colored base for the abundant slivers of onions that were so soft, they (pardon the cliché) melted in my mouth. The raft of hearty bread and cheese that was dressed up with freshly snipped chives was so fully saturated by the rich broth by the time I got to it, I couldn’t help but savor every last bite. The cheese was also in abundance, with playfully long strands of it running from my spoon to my bowl, this was everything I’d want my French Onion Soup to be.

I found the portion size to be a little deceiving, when it was first presented to me I thought I’d I’d be hungry afterwards but there was more in that little crock than met the eye. I left full and satisfied, but not before trying the special little treats send out by the pastry chef – a bite-sized butter cookie that was packed with buttery flavor, and a passion fruit jelly that was so soft and fruity with lots of tangy tropical flavor. So, dear readers, if you find yourself craving a classic French Onion Soup, made that way it was intended to be made, then stop in to Deuxave, grab your soup spoon and enjoy! 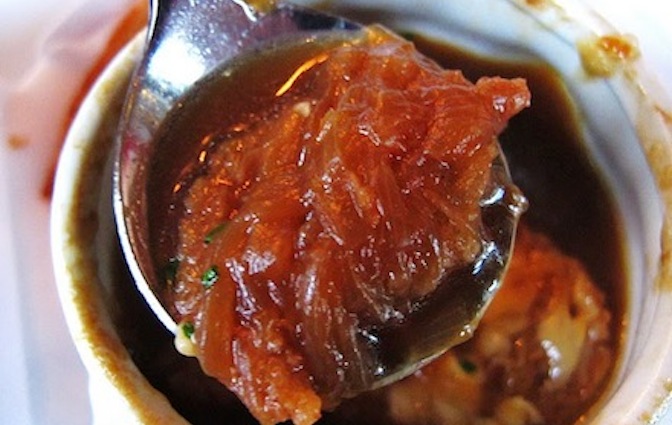 a Spoonful of French Onion!