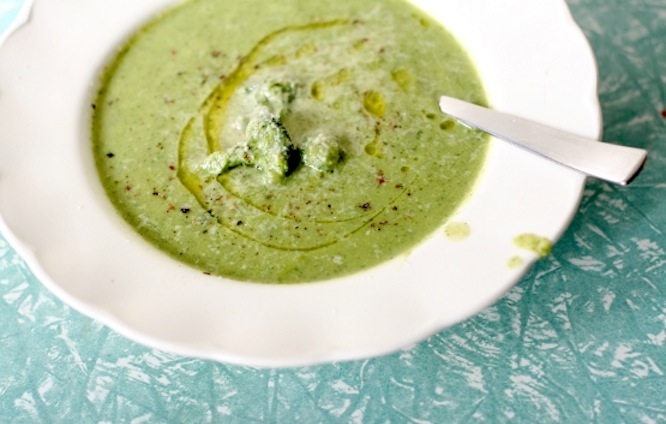 Phew. I’ve just finished packing for my first visit to Moreton Island – my soon-to-be home! Actually, I have been there once before, by boat, for a fleeting splash on the beach, but this will be my first chance to really get to see the place. I am giddy with anticipation. My camera batteries are charged! Before I go, I wanted to share this, my new favourite soup. I hope I haven’t bored you with the recent run of soups. It has been rather icy round here, in this house built for summer, and I still have both feet squarely in soup territory.

This soup is nutrient-loaded and quick to prepare. Broccoli, kale – now popping up regularly at my local market – and cannellini beans over a base of onion, garlic, leek and celery. Simple, comforting and nourishing. But seriously, it is this good. Let me explain. What I really, badly wanted for lunch last Saturday was leftover pizza – which probably would have been fine, but I’m a little more cautious around leftovers with the Bunyip in mind. Instead I made this soup, topped it with fresh grated parmesan and ate it with buttery toasted wholegrain muffins. The cannellini beans give the soup a thick creamy texture and a nuttiness that you wouldn’t guess is lurking in that puddle of earthy green. I have to say, I did not regret the lack of pizza! Yep, it’s that good.

The recipe is based on this, which I saw on Pinterest (an irresistible lure for my bowerbird eyes) and filed away under ‘need to make’, though didn’t actually think to look at the recipe until after I’d made it! You can steam the greens as per the original recipe, though I don’t think it’s necessary as all their goodness is retained by throwing them into the stock – just don’t overcook them.

One more thing. I didn’t mean to mislead you when I mentioned that I don’t own a food processor. Well, it’s true, I don’t. But I do own a bench-top blender which was gifted to me many years ago, and have been pulling it out recently to make smoothies, and this soup. Well worth it for that creamy texture of the beans, though if you have a stick blender, that’s probably a lot easier.

This is a quick soup, so I used canned beans. But I imagine it would be immeasurably better with beans you’ve prepared yourself. If you don’t have kale, you could leave it out or substitute spinach or chard/silverbeet. Toasted pinenuts thrown on top also hit the spot. 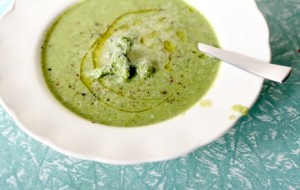