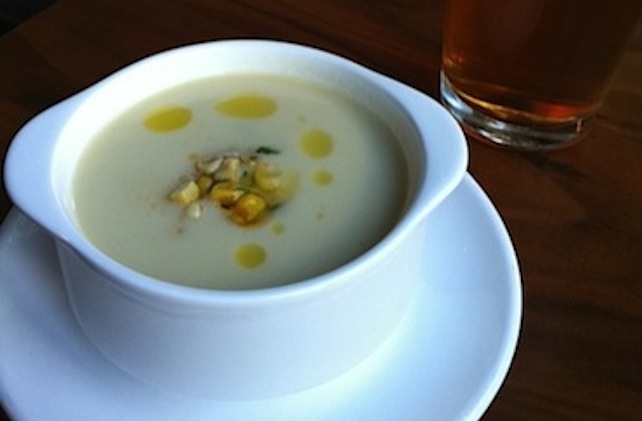 Lucky for all of us, chefs are busy turning the Cambridge neighborhood designated as “Area 4” into a Mecca of good eating.  Area Four audaciously takes the neighborhood’s name as its identity, and does the moniker proud.

They say that any sufficiently advanced technology is indistinguishable from magic. Chef Michael Leviton of Cambridge’s new high-concept, low-stress eatery Area Four doesn’t use high technology to create his Cold Corn Soup  (just coming onto the menu for fall), but the result definitely qualifies as magic.

It’s almost impossible to believe that the creamy Cold Corn Soup is made without dairy. It takes a long time, and a lot of corn, I’m told, to make a corn broth this rich and flavorful; the labor is definitely worth it. Silky white, the soup is made even better by the addition of poblano peppers (for subtle heat), a touch of cilantro (for depth) and sundried tomato vinaigrette, its tartness balancing and highlighting the corn’s sweetness. Fresh roasted corn kernels provide surprising pops of flavor, color, and texture. I’m a nut for corn chowder, but the end of summer calls for something lighter, and this delightful (unbelievably vegan!) cousin is a soup I could eat again and again.

I was also, happily, able to catch the Roasted Local Vegetable Gazpacho, which is on its way off the menu as produce switches over to fall vegetables. As an official gazpacho stalker, I can attest: this is a gazpacho of substance. Roasting the vegetables adds smokiness and sweetness, and the usual vinegar tartness here becomes almost citrusy. It’s a mellow and refreshing bowl, nicely presented with a crunchy salsa of heirloom tomatoes, almond slices, and cucumber. Get it while it’s still on the menu. 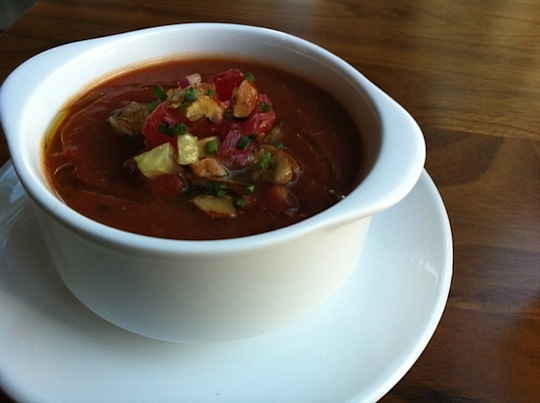 I rounded out my meal with “KK’s Bacon Sea Salt Nugz,” which are little home-made pretzel nuggets doused with bacon and served with a devilish ramekin of home-made pimiento cheese—I wonder whether students with the munchies know about this dish, because it would make them (and made me) very very happy. On the less indulgent side, baba ganoush came in a cute little pan with a trio of thick, grilled pita points. The puree was not over garlicky, with a nice eggplant bitterness and aromatic olive oil. The best bites were the ones sprinkled with zataar, which carried a nice kick. I didn’t sample the extensive beer, wine, and cocktail lists, opting instead for the refreshing jasmine iced tea.

The experience at Area Four is enhanced by the mise-en-scène. The restaurant is divided in two: “coffee/bakery” and “bar/oven.” The coffee/bakery, separated from the bar/oven by a marvelous sliding barn door, is open only through the very early evening. For lunch and dinner, the bar/oven’s industrial-yet-homey dining area is through the attractive bar, up a few steps and past the two impressive wood-fired ovens. There’s a large communal table, and many of the two-tops can slide on tracks to become four-tops. (That’s one of the many whimsical touches I notice as the meal progresses, the rest of which I’ll leave for you to discover—no spoilers here.) Huge menu chalkboards echo the floor-to-ceiling windows, which look out onto a pocket park next door. The pavement outside sports a small crowd of tables for al fresco dining.

Area Four’s atmosphere (and price point) is pleasantly casual. The menu might seem confusing at first, but my jeans-clad waiter helpfully explained: cold starters are small plates, hot starters are a little larger, the entrees are large enough for sharing, and there are, of course, the pizzas. There’s a lot of local sourcing, and the pastries are baked fresh. All in all, Area Four is the kind of place—and serves the kind of soup—that tempts me to move back across the river.