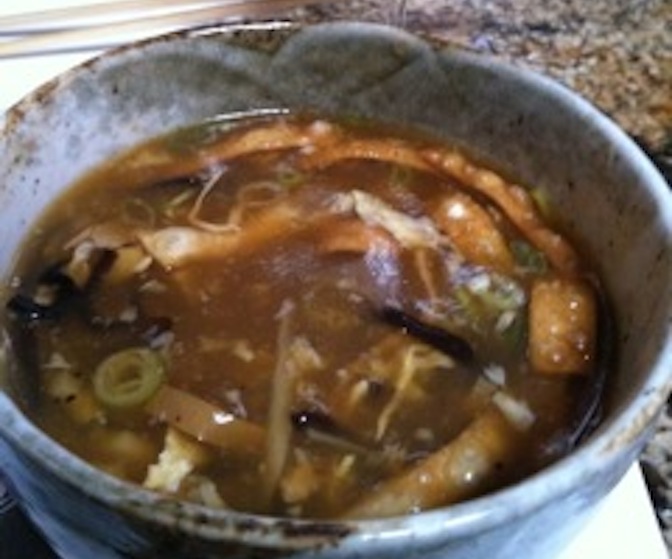 Sushi. Wood-grilled steaks. Chinese comfort-food standards. Dim sum. Shabu-shabu. Any one of these could be a restaurant concept all on its own. How do you combine them into a cohesive whole? Simple. By doing them all excellently.     I didn’t try every item on the menu, but, thanks to my seat at The Red Lantern’s open exhibition kitchen, I saw everything that was going out. Sparkling bowls of Tik Tok Chicken. Pillowy Barbecue Beef Buns, a special on the night I was there. Platters of the most insanely colorful, imaginative maki I’ve ever seen. It was hard for me to buckle down to the business at hand: Red Lantern offers two soups on its menu, Miso and Hot and Sour.    If you turn away from such run-of-the-mill names, it’s your loss. These are two brilliantly done examples of soups that in most other restaurants would be afterthoughts.   The miso sets itself apart from the everyday by the addition of dashi and sake to the usual simple broth with scallions and seaweed. (Dashi is made from seaweed and bonito flakes, so the miso isn’t vegetarian.) It’s a pretty soup, each bowl prepared to order with a sprinkling of chopped chives. There are plentiful squares of seaweed, and the dashi provides more seaweed flavor, bringing that facet into the foreground. The result is deeply nourishing yet light, and sets off well against a glass of Nigori from their rather well-stocked sake list.   It was a pleasure to alternate sips of miso and sake while watching the servers sample the specials at the expediting table nearby.

I was able to chat with chef Kevin Long, who let me in on plans to vary the miso recipe as the seasons change: grated mountain yam, for instance, will lend the soup more heft in the chilly winter months. His strategy for the restaurant is to start from a familiar culinary place and, once that ground is established, experiment and branch out. It’s an interesting concept; so far, the innovations are subtle, but the results so good that I’ll gladly follow him where he’s going.   A little plate of fried shrimp shumai with Chinese mustard sauce, available on the Signature PuPu Platter, served as an intermission feature between the soups. The shrimp was sweet and just soft enough, its envelope light and crunchy, with the Chinese mustard and a dollop of mayonnaise making an addictively popable bite.

The hot and sour soup arrived in its unassuming bowl. This is one of my favorite soups (the other two being gazpacho and corn chowder). The Red Lantern’s is described as having 5-spice tofu, pork broth, and white pepper. Simple, right?   Well.   This is one of the best, if not the best, hot-and-sour soups I’ve ever had. My notes say, “Wow.” Simply presented, the soup is paradoxically elegant. The balance of hot and sour is perfect; the tofu is intensely flavorful; there’s a constant play of textures with the toothsome tofu, wood ear mushroom, other vegetables, and tender strips of pork. (There are also crispy strips of wonton, which you can’t see in the photo because I had eaten them already. Such is the distracting seduction of this bowl.) After the fifth spoon or so, I notice my lips tingling.

There’s sriracha, the yummy garlic-infused Thai hot sauce, in there, too, Chef Long tells me. By halfway through the bowl, I’m breaking a pleasant endorphin-fueled sweat. But the soup doesn’t feel overly hot at all. Instead, there’s a complexity to its heat. The goal (masterfully achieved) is flavor, flavor, flavor.   Another “wow,” though not on the soup front, was the wood-grilled asparagus that I had alongside excellent Singapore Street Noodles. The smoke on the asparagus was wonderful; a savory glaze and bonito flakes waving merrily in the steam completed the dish. The noodles featured perfectly stir-fried shrimp and barbecue pork that, like so much else, completely redefined my idea of this Chinese staple.

There are a lot of “wow”s at The Red Lantern. The room itself boasts a number of different areas: a sexy, dark lounge area with couches and a Blade-Runner lit bar; a cozy (but by no means small) private dining room; and the main area, which on its own offers the exhibition bar, tables, large booths, and a 12-seat shabu-shabu table. (Come to think of it, shabu-shabu counts as soup, right? I’ll be back.) The main dining room (which felt strangely cavernous when this space was a Bertucci’s) is presided over by huge Benday-dot murals of the Buddha, a single gargantuan ceiling sculpture featuring Chinese motifs in traditional red-and-gold, and a truly over-the-top exhaust hood over the main cooking area. It made me laugh delightedly, but perhaps you had to be there. That’s a good idea. Go there now. Get the soup, and anything (everything) else that strikes your fancy.