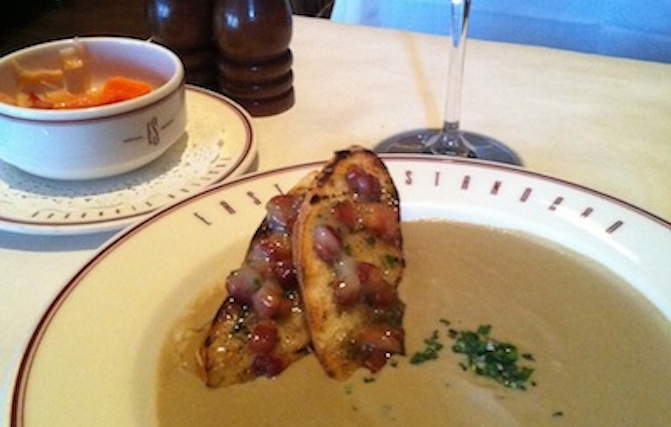 So here’s what they do: they take lardons of bacon, render them until they’re incredibly crispy. Then they take the rendered fat, let it solidify into a smooth, translucent spread—which they call bacon schmaltz. Then they slather a crispy, thin plank of bread with it, and sprinkle on a ton of the crispy bacon. They put a couple of these creations into a bowl of soup. Then you eat it, and you are happy.

If you’re lucky enough to be at Eastern Standard on a night when their Mushroom Puree with Bacon Schmaltz Crostini is starring as their Market Soup, that is. I can’t tell you when this will be, because the Market Soup, changes every day, and often between lunch and dinner. The night I was there, the afternoon soup had been Carrot Ginger. I heard this news with a tinge of regret, because I really love carrot ginger soup (it’s usually delicious and can seem virtuous—all those vitamins and stuff). But the moment I tasted—hell, the moment I saw the mushroom soup at hand, I was completely won over, and any thoughts of vitamins, let alone virtue, were history.

Schmaltz is a gift to cardiologists from Jewish mothers everywhere: simply the fat slowly rendered from chicken skin, and used to add richness to everything from matzoh balls to chopped liver. I’ve heard that it sometimes serves a spread, but never tried it that way. Using bacon (and calling it “schmaltz”) shows the homey, clever kind of place Eastern Standard is.

The mushroom soup on its own is delicious (and, with the crostini left off, vegetarian): a subtle taupe color, like a comfortable mid-century-modern sofa, perfectly smooth and buttery, a little sweet from plenty of cream that complements the rich, earthy mushroom flavor. A pretty sprinkling of chives adds a bright note that doesn’t distract from the crostini, balanced on the side of the plate, beckoning.

As the crostini warm in the soup, the bacon schmaltz turns transparent and works its way into the puree, adding notes of salt and smoke and raising the richness quotient well into the sinful zone. The lardons themselves are perfect, and the bread provides just the right crunch.

Service came with a small bowl of house-made giardiniera, a pickle of onions, carrots, English cucumbers, sweet red peppers, and fennel. Their bright acid notes provided a nice contrast to the soup, as did a generous pour of Côtes du Rhône.

My experience didn’t end with the Market Soup. I was also able to try their French Onion Soup, which is available on the lunch and late-night menus. This version was, in its way, lighter than the usual, with a base of veal and chicken stock in place of beef. But “lighter” is only relative: there’s plenty of sin in this bowl, too. The caramelized onions are deglazed with sherry, and a splash of sherry vinegar is added at the end, making the flavor bright. The traditional crouton, completely covered by satisfyingly stringy cheese, melts into the broth and creates an onion porridge that (like Baby Bear’s) is just right.

Eastern Standard is a high-ceilinged, surprisingly quiet room with a sleekly retro feel: dark wood, red leather banquettes, studded brown leather chairs, vintage images on the walls. The bar was really hopping with the after-work crowd, and the cocktail menu is tempting and impressive. The ambience is casual, the diners a mix of guests at the Hotel Commonwealth, where the restaurant is located, and others who clearly had come farther afield with Eastern Standard as their destination. There’s also al fresco dining, now that the weather is finally warming up. Most of their soups are available in vegetarian versions. The small plates are in the upper moderate range, as are the soups. Entrees look worth the splurge. The servers were knowledgeable and friendly; they clearly take their work, and the food, seriously, and want you to have a good time.

I’ll definitely return; with two such winning soups, I’m willing to trust whatever they offer as their Market Soup. But if anyone wants to start a phone tree to notify the masses when the Mushroom Purée is on the bill, I’m in.