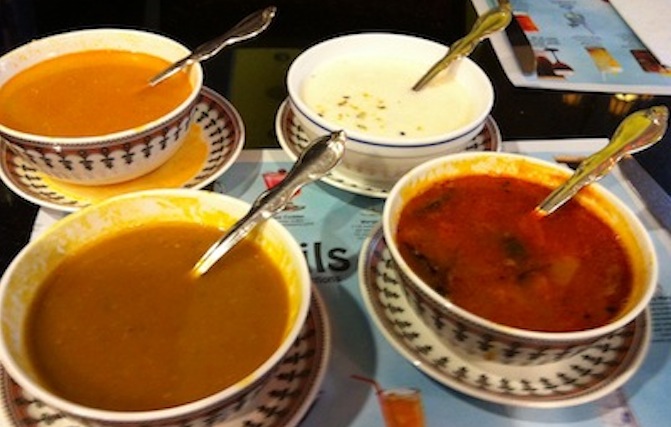 India Pavilion, one of the mainstays of the Central Square Indian restaurant scene in Cambridge, has recently undergone a renovation and expansion. They’ve also expanded their menu, adding a few dishes I hadn’t seen before, like Jerk Chicken Curry, Lobster Mushroom Masala, and Lamb Achani, and a wide array of huge, crepe-like dosai. I’m excited to revisit in order to sample those, but my mission on a recent blustery March afternoon was, of course, soup.   Most Indian restaurants offer one or two soups. India Pavilion offers four, all in rather generous starter portions. Each is excellent in its way, so there’s something suitable for almost every taste or mood.   The vegetarian Coconut Soup is a gentle and comforting version of this gentle and comforting brew. Milky white with a few green seeds (maybe coriander?) floating on the surface, this was sweeter than the coconut soup found in Thai cuisines, and more subtly spiced. There was lots of shredded coconut, which made a nice textural contrast to the silky soup. My friend Michael, who loves sweet soups, was jealous (maybe I’ll bring him along on my return trip).   Stepping up one notch on the subtlety scale, we move on to the Mulligatawny Soup. I’ve been a fan of this soup ever since I was a boy (when the name was the most exciting thing available on our local grocer’s shelf), and it’s one of the oldest and most traditional soups served in Indian restaurants. This version, also vegetarian, comes with a wedge of lemon, which you add at the last minute. It starts off quietly, with the usual blend of rice and spices. The bowl really grew on me: after a few spoonfuls, the spices really started to bloom, and my spoon kept going back again and again. There isn’t much spicy heat here (nor should there be), just a fragrant bouquet that builds and builds.

For heat, you’ll want the Sambaar. This (vegetarian) soup of lentils, vegetables including carrots, cauliflower, and zucchini, and spices (featuring mustard seed) is the punchiest soup of the four. Sambaar is traditionally served as an accompaniment to dosai, the large stuffed crepes that restaurants around Boston blessedly started serving in the last few years. Here, you get a big bowl of it, and it’s a big bowl indeed. Like the mulligatawny, it comes with a wedge of lemon (which you should use!). Between the lemon, the soup itself, and the mustard seeds, there’s an immediate tip-of-the-tongue tingle and a warmth in back that builds and builds to a significant level of heat—three cheers! The sambaar had tons of flavor, and enough heat to make you sweat without blasting your tastebuds (and obliterating the rest of the meal).

The last option looks simple: Chicken Soup. But this is no run-of-the-mill yellow broth. India Pavilion’s version has the solid, robust flavor of chicken soup made from scratch. They use the whole chicken, then shred lots of the white meat and add it back into the soup. That’s what I was told, but it seems too simple to account for the intense chicken flavor here. This is like eating a roast chicken in liquid form, and as I got toward the bottom of the bowl, it just got better and better.

India Pavilion’s updated space is airy and sumptuous, but casual; there were lots of groups from nearby offices obviously happy to be there. Service is friendly and expert, reflecting the restaurant’s more than twenty years in Central Square, and there’s a full bar, which I’ll take advantage of next time I’m there. I also might brave the vindaloo—but first, I’ll get one of their marvelous soups.