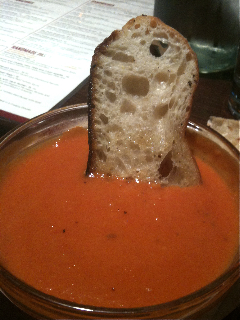 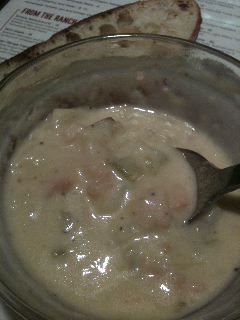 It’s a shame to acknowledge that Beethoven couldn’t have know Founding Farmers sous chef Lisa Frantz when he said, “Only the pure of heart can make good soup.” Clearly, she has never thought naughty things, gives to the homeless, eschews a compliment and loves unconditionally because she makes one hell heck of a good soup.

More likely, Ms. Frantz (pronounced like France if you speak like Paula Dean) learned her dark culinary arts from the likes of Tituba before she became so benign because her soups are hedonistic, sumptuous and above all sinfully pleasurable. Then again, you have to be wholesome if you want to make food at Founding Farmers; their commitment is “fresh farm to table American inspired true food…inspired by the heartland with sustainably farmed products, including regionally sourced items and in-season vegetables whenever possible.” Just because she’s “forced” to use fresh ingredients doesn’t take away from the talent required to elevate Mother Nature and distill her bounty into a great soup. It starts at the end — breaking down the day’s roasted bits and making stock every night for soup the next day.

I was treated to not one, not two but a divine trinity of soups: roasted lemon chicken, clam chowder and perpetual farmhouse favorite, roasted tomato. If you’re thinking tomato soup (yawn, ho-hum) you have not had a soup from Founding Farmers. Tomatoes — between 24 and 60 quarts (quantity depends on the season, where they’re sourced, how juicy they are), fennel and garlic are roasted daily to coax out the vegetables’ natural sweetness and develop new, more complex flavor compounds. Add to that some white wine, shallots, spicy goodness, thicken slightly with finely deconstructed house-made ciabatta crumb (gluten allergy alert!) and finish with a little cream.

In addition to its great flavor, two other things caught my eye (literally and figuratively). Figuratively speaking, there’s a bit of heat that sneaks up on you and makes your eyeballs sweat… in a good way. To be clear, it’s heat not spice; heat isn’t a sharp, surprising pain on your tongue (to me, that’s spice) — it’s sublime and radiating. What literally caught my eye was a sheen of tiny, tiny, tiny fat pearls that float on the surface, refract the light and remind you of soap bubbles. Now I know I’ve repulsed a few of you out there because I used the “F” word, but I need you to embrace the reality that fat = flavor. Did you think they roasted those veggies dry?

Nothing is certain in a Chef Frantz recipe except the ingredients. How much of an ingredient — even the varietal of an ingredient — are up in the air depending on where and when the ingredient is cultivated. Case in point: the humble potato. No longer that cheap starchy soup filler we’ve come to expect, Lisa Frantz treats potatoes with the respect I give a closet full of designer shoes. Just as you wouldn’t wear white ever after labor day, a potato’s starch changes with the season and you have to swap out (or at least Frantz does) those varieties accordingly (from Idaho russets to Yukon gold, Winnemuccas to red bliss).

If today’s Iron Chef secret ingredient was the potato, the clam chowder I tried would have won hands down. I’m sure all chefs would welcome the debate — is it clam chowder or puree of potato with clams and bacon? And frankly, I’d volunteer to sit on that panel trying to decide. Naturally clams are more expensive than potatoes so you’d expect to see that main ingredient leading the menu item, but this chowder has such a pronounced potato flavor (red bliss, because I know you’re wondering) that it almost obfuscates the clam in “clam chowder.” This isn’t a knock on Frantz; to the contrary, it’s a compliment to both her, for selecting the tuber, and the potato itself. I almost forgot that potatoes have flavor (like my taste buds have been watching too much Fox News). Perhaps you taste the potato because it’s on a short list of ingredients: clams, clam juice, bacon, celery, pepper, cream, butter and Tabasco. Again, that little bit of tart heat is the elusive je ne sais qua that compels your spoon to the bowl for another…hmmm, how to describe a state between sip and bite? The chowder is too thick to sip and far shy of paste, but hopefully you get my drift Goldy Locks — it’s just right.

Chicken soup so good it could cure cancer. 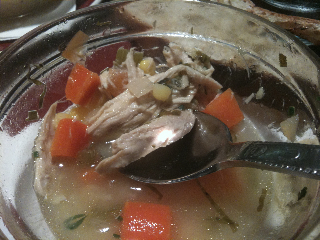 I’ve saved the best for last (and trust me, I struggled to keep from calling out one soup over another, especially when all are so flavorful) but the roasted chicken and lemon soup is like a whole Thanksgiving meal reduced to a tablespoon…that is, if only we weren’t celebrating the harvest. This soup, while having all of the great flavors you’d expect at Thanksgiving (poultry, carrots, celery), is more of an homage to spring with its sharp citrus kick, bright green flecks of chive, small yellow corn kernels and a basil pesto. You can see from the picture that Frantz tears huge chunks of chicken and (not pictured) whole lemon slices. It’s a small point to be sure, but cut up cubes of meat is so…so Campbells.

Molière comes to mind when I can’t do justice to a soup like this; he said, “I live on good soup, not on fine words.” True enough.