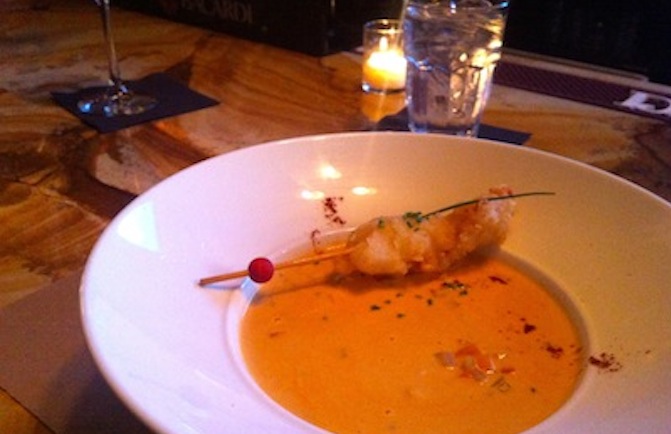 At Gem Restaurant & Lounge, one twisty staircase up on a secluded side street in downtown Boston, the friendly bartender confides in us that the New England Lobster Chowder is her favorite dish. With good reason: it’s the kind of starter that can make the rest of the meal superfluous.

A relatively new venture from the same group who have given us Red Lantern and Shrine, Gem exudes a luxe, supper-club atmosphere with (to my eye) a touch of Raj ambience. There are patterns everywhere: dark wood latticework, tortoiseshell like tiles behind the bar, damask upholstery on the comfy bar stools. The warm, deep palette avoids busyness, and bits of sparkle (crystals on the light fixtures, mirrored architectural accents) enhance the moody lighting. Beyond the bar in each direction, there are larger dining salons, brighter (at least in the early evening) than the bar, but just as inviting.

The place setting is butcher paper seemingly hand-stamped with the restaurant’s logo, a nice touch in such a rich environment. Knowing that a lobster chowder is probably going to be on the sweet side, I order a “Death in Venice,” a nice mix of Citron vodka, Campari, and sour mix. It’s a nice summer drink, well balanced between bitter and tart.

The menu’s description reads: “Lobster Cream, Triple Bacon, Fenugreek, Tempura Lobster Skewer.” The bowl is deep, and the serving is generous. Dipping into the soup itself—really more of a bisque—there’s a big initial hit of bacon, followed by sweet cream and lobster. The dish makes good on its chowder claim with small dice of potato and carrot, big (and plentiful) chunks of lobster, and tender lardons of more smoky bacon. The tempura lobster skewer is crisp on the outside, juicy on the inside, and provides just the right amount of saltiness that the chowder needs. And, beneath everything, there’s an interesting sweet undertone that’s different from the cream and the lobster. A little research reveals that it’s the fenugreek, imparting its whiff of maple-ish flavor. It’s a memorable bowl that hits all the taste buds.

With its enveloping atmosphere and cool, sexy soundtrack, Gem is the perfect place to put on your good shoes and flirt with co-workers after a hard day in the financial district. It’s worth a moderate splurge for those of us farther afield looking to relax over a satisfying reinterpretation of classic chowder.