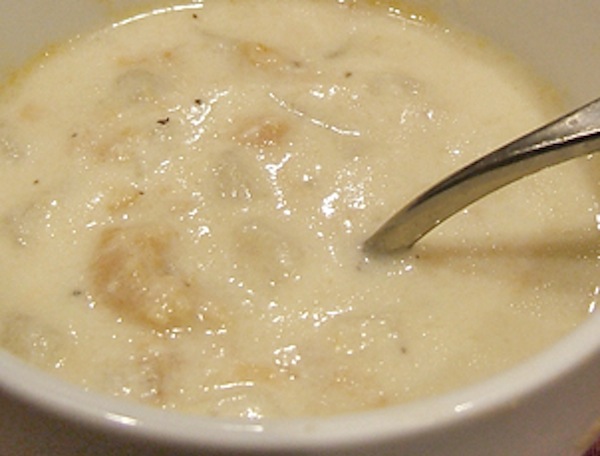 recently had the pleasure of opening a box which arrived on my doorstep to find, nestled inside it’s own mini Styrofoam cooler, several frozen pouches of chowder from East Coast Gourmet, complete with all natural oyster crackers baked in Vermont and a clam-shaped chocolate truffle as an added bonus. What a treat!

The chowders were super easy to heat; just immerse the plastic bags in boiling water for 10-12 minutes and you are ready to eat. There were three different varieties; Lobster Bisque, New England Lobster Clam Chowder and Nantucket Lobster Chowder.

The Lobster Bisque was quite nice, even-textured and rich, with good lobster flavor and some complexity lent by the herbs. However, I have to admit I thought it was a little bland. The website says they “roast and flame the lobster shells with a splash of cognac to add exceptional flavor to the base,” but I somehow felt it was missing the sass that the traditional sherry lends.

Next up was the New England Clam Chowder, which was excellent.  It was everything a good chowder should be; creamy with plentiful chunks of clams, onions and potatoes, and nicely seasoned. I’m one of those people who don’t like chowder so thick that you feel full after a spoonful or two, so this was the perfect consistency for me—just like my grandmother used to make.

Lastly, we tasted the Nantucket Lobster Chowder, which was easily the most flavorful and memorable of the three. Wow! Full of good-sized chunks of lobster meat, diced potatoes and a terrific base made from lobster stock, cream, and spices, this one the man of the house vying with me for whatever was left in the pot, and we used a hunk of French bread to sop up every last drop.

The best thing about these chowders?  Coming home from a busy day, all I had to do was boil water! After indulging in this lovely dinner, I checked out East Coast Gourmet online, finding that they are a local company set up to ship New England seafood specialties anywhere in the U.S.  Their prices are high enough that while living here in New England, within reach of excellent seafood, I couldn’t justify treating myself. However, as a special occasion gift to my far-flung siblings who miss the cuisine of the area, I think it’s a brilliant idea. (Just don’t tell them, okay?) 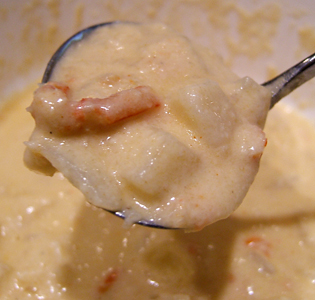