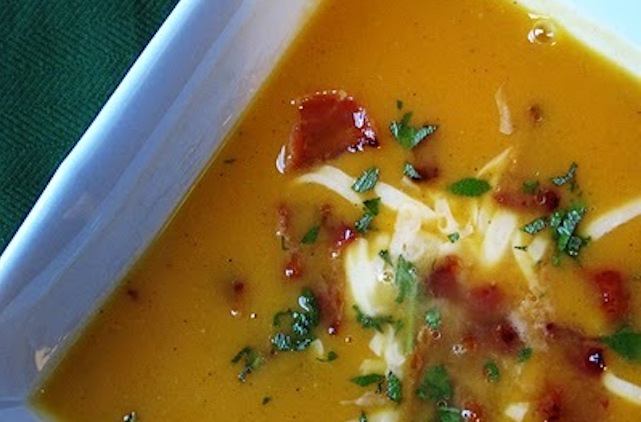 I wish I could get in on the squash lovefest that’s happening right now but for whatever reason, squash is one of things that’s just “meh” to me.  I mean if it’s on the plate I’ll eat it but I won’t jump out of my seat about it.  This is a rather frustrating concept to me because I really want to like it.  Honestly, I do.  I hear everyone gushing about his or her latest squashy creations and it seems to be all over restaurant menus.  Take for example butternut squash soup.   It sounds great when I think about it and it even still sounds great as I order it and it’s being placed in front of me.  But it never fails.  No matter how talented the chef or how fantastic the recipe; I just don’t really like squash.

So I made the anti-squash soup and called upon squash’s cousin, the sweet potato to help me out.  I started by pureeing three sweet potatoes with an apple and then added a whole mess of classic fall flavors; cinnamon, nutmeg, maple syrup, sage and rosemary.  You know, the usual suspects.  Oh, and then I threw in BACON.  That’s right, sweet, sweet bacon to balance all the sweetness with some smoky salt flavor.  (I don’t know why bacon to me sort of deserves a fanfare whenever I mention it.  I sometimes feel the need to put it all caps.) And then to finish it all up, I added (of course) cheese.  That’s right, glorious, melty cheese that sort of swam on top of the soup.  I had planned to top this off even further by some toasted hazelnuts but I guess I didn’t have any hanging around my Small Boston Kitchen like I thought.  Don’t you just hate when that happens? 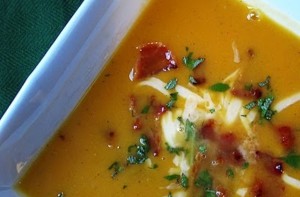