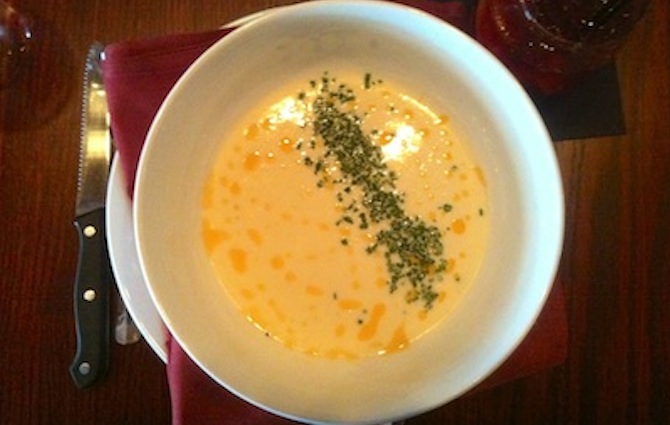 The summer has really kicked in here in Boston, bringing the season of cold soups: gazpachos and melon/cucumber/yogurt concoctions can keep the soup flag flying when the weather’s too hot for bowls that steam. Sanctuary, a stylish yet comfortable newcomer to the Jamaica Plain neighborhood does its bit with a refreshing twist on Vichyssoise.

Open a little over a month,  Sanctuary rests on the site of the former rectory of the Church of the Blessed Sacrament on Centre Street in Jamaica Plain. The whole block has been undergoing development, and Sanctuary has claimed a high-profile corner exposure. All of the décor is reclaimed from various churches around New England: huge doors have become the magnificent bar, banquettes are built from oaken pews (reconfigured, raised and cushioned to create intimate, comfy nooks), and lustrous stained glass divides the bar area from the dining room proper. The result is an airy, quirky space that invites conversation even as it fills with a delightfully mixed crowd. (The early Wednesday evening in question included counter-culture families with their very well-behaved children, comic-book artists in their thirties, old-line JP progressives, sports fans, and some genuine old folks out for a good time.) There are two big televisions in the bar area, but they’re silent except during games, and the eclectic music is kept low.

Owner Adam Rutstein is aiming for “upscale comfort food,” and he gets a hit right off when my friend Mary-Ann (she of the Weird Sisters Mushroom Soup recipe I’ve shared elsewhere) and I are greeted with a basket of super-crunchy house-made potato chips accompanied by a snappy mustard aioli. The sensibility may be upscale, but the prices are quite reasonable—meaning Sanctuary could easily rise to the top of anyone’s regular rotation. The menu is (as a lot of menus are these days) fairly meat-centric, but there are more than a handful of vegetarian selections, especially in the “In the Beginning” section (starters, of course).

Among those vegetarian offerings is the Potato and Leek Soup (subtitled Vichyssoise). This bowl—an incredibly generous pour at an incredibly reasonable price—is lighter than its traditional French cousin. When it arrives, very cold, from the kitchen, the flavor is ephemeral, with the leeks (and the chives sprinkled on top) forward. As the soup comes to room temperature, more potato flavor comes through. The whole ensemble is enhanced by a few drops of garlic chili oil, just enough to set up an intriguing tingle. It’s a nice take on Vichyssoise (a little more seasoning, perhaps), and now that the weather outside has gotten truly fiery, its cool attractions are even stronger. 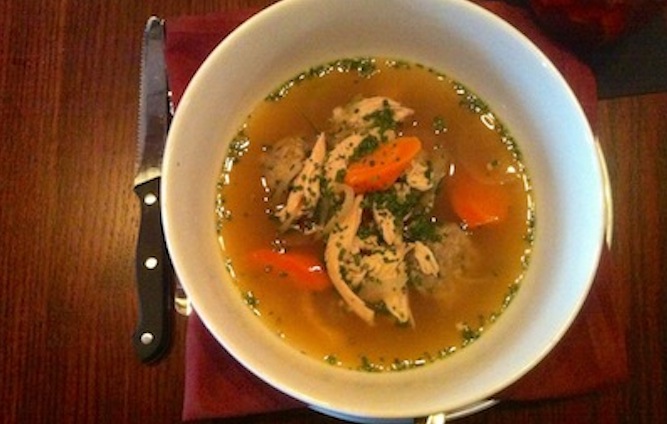 If the first soup is a little laid-back, the second—Matzo Ball Soup—steps right up, shakes your hand, and becomes your new best friend. Like the previous bowl, this is a big serving, with lots of chicken and veggies (carrots, onion, celery, parsley, and fennel). The matzo balls themselves are a light khaki color instead of the usual yellow-white. As it turns out, instead of the traditional chicken schmaltz, chef Christian (yes, that is really his name) uses duck fat. The resulting dumplings are a little heavier than my mother’s, but their flavor is marvelous. The surrounding broth would do any Jewish mother proud, rich and golden chicken goodness. The very large chunks of carrot are a little too al dente, but this is otherwise an exemplary soup.

Two big bowls of soup don’t leave much room, but one of the starters—Sanctuary Mushrooms, with black garlic, bread sauce, and herbs, are deliciously rich. There are plenty of other tempting items listed for later visits. Moreover, there’s a great drinks program, including substantial beer, wine, and cocktail lists. Mary-Ann and I both have the Short but Sweet, a sangria of port, blood orange, and ginger beer. Mary-Ann reports: “I could drink this all night.” It goes down very easily indeed.

Sanctuary’s motto is “All Are Welcome.” They make good on this promise, and offer plenty to enjoy while you take a respite from the summer heat.