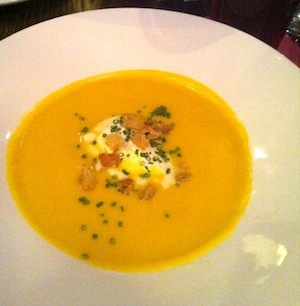 It’s autumn, and not only the leaves are turning yellow. Fall means one thing in Soupland: squash soup of one kind or another, anything from butternut to pumpkin, as dependably comforting as the sweater you’re finally admitting you have to put on. I’ve seen squash soups simple and outlandishly complex, soups that were tasty but safe, and soups that dared a high-wire act that maybe needed a little more practice. The trick with squash soup, at least for an intrepid soup reporter, is to find what makes each tawny elixir special.

Foundry on Elm’s Butternut and Delicata Squash Soup scores high on flavor with two sure bets: bacon and crème fraiche. The soup itself, bright and fragrant with nutmeg, isn’t shy about its sweetness. Once the tart crème fraiche is added to the equation, the soup comes into balance—the squashes are rich enough that the crème serves to lighten it. There’s a scattering of very crunchy croutons, which have definitely spent some time getting to know a rasher or two of bacon. Like the crème, the salt of the croutons help the soup hold its savory line. This is a good soup for a chilly autumn evening.

Whether it’s available on the particular chilly autumn evening you attend—which you should—is up to the two chefs, who change the soups several times a week and, I’m told, are pretty competitive when the subject of soup comes up. They both love soup-making, and their rivalry apparently brings a lot of creativity out of the kitchen.

Foundry on Elm is lucky to have them. They make good food, including a great burger, the perfect fit for the restaurant’s vibe, a mix of British pub and neighborhood hangout. The early evening crowd is eclectic: mostly professionals, but a healthy dose of students, filmgoers, artsy types, and even some parties of four generations, all enjoying themselves. While it’s quiet on a Wednesday, I know that it hops on the weekends, as most of the places in Davis Square do. They probably won’t be throwing open the big windows again until spring. No matter: it’s warm inside, and, along with a ton of beers, they pour a good bowl of soup.