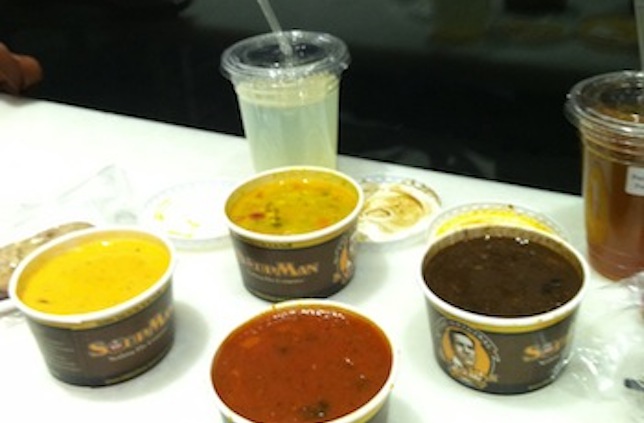 With the recent Super Bowl ad for Acura featuring cameo’s with Jerry Seinfeld and actor Larry Thomas (The Soup Nazi), we are yet again reminded of one of the most classic soup legends ever introduced on television. What one may not know is that Al Yeganeh, the gruff man that inspired the soup Nazi character on “Seinfeld”, is alive and stirring and his soup is served up in dining locations in 6 states and distributed in grocery stores in over 30 states.

As of late, Shaquille O’Neal is spokesmen for the soup, standing by the concept that these bowls of goodness are a healthy alternative to fast food. The Original SoupMan’s informative website also shows the softer side of this company revealing that Reggie Jackson, the American Hall of Famer and early supporter, is the Chairman of the “Al Feeds the Hungry Foundation, Inc.” This is a non-profit organization launched by The Original SoupMan in 2005 that donates funds to local hunger charities each time a new franchise location opens.

Nestled cozily in Manhattan’s Midtown neighborhood, The Original SoupMan offers great soup at good prices, making it the perfect place for a quick and hearty meal without breaking the bank. The rules are simple and posted prominently on the wall. The line must be kept moving. Pick the soup you want! Have your money ready! Move to the extreme left after ordering! No RETURNS!

I got to the restaurant for the first time about an hour before closing on a Friday night, and its attendance then was sparse. However, the second time I went, on a Tuesday during the lunch rush, I couldn’t get a seat. Most of the patrons seemed to be professional types who worked in the area, so it was pretty cool to see so many buttoned-down people tucking into their early afternoon soups.

A cup of most soups on the menu go for $4.49, including the corn chowder, tomato basil, and Cuban black bean, all of which I purchased. The tomato basil was about the consistency of marinara sauce, which at first seemed weird, but turned out perfect. The Original SoupMan’s take on the classic tomato soup provides a bite and adequate substance, as opposed to the usually-too-thin-and-boring renditions elsewhere. The Cuban black bean was a  favorite of mine as it was spicy, and had been marinated to perfection. The only reservation I had with the soup was that it did not come with tortilla chips.

The best soup that I had at The Original SoupMan was the lobster bisque, which goes for $6.99, but is well worth the price. The lobster was thick and substantial, the broth flavorful and hearty. Each cup of soup comes with a slice of fresh bread (white or wheat are both good—although I prefer the latter), and I recommend getting one of their homemade green teas or lemonades, which retail for $1.59 each.

Overall, The Original SoupMan is worth the trip if you are in one of the busiest neighborhoods in one of the busiest cities in the world. Lunch for one costs well under ten dollars, which is a steal by Manhattan standards. The service is friendly, the ambience quiet, and, most importantly, the soup is great. 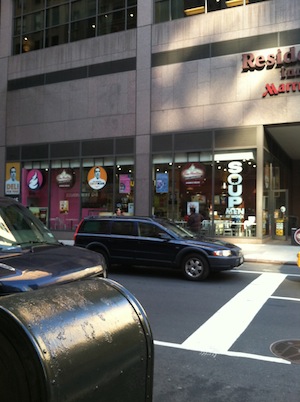