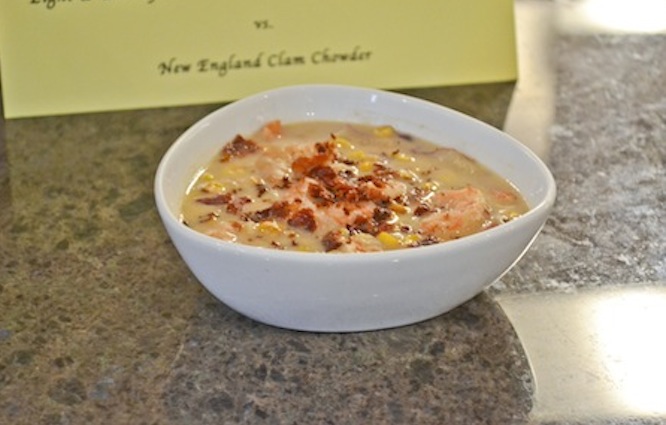 I was fortunate enough to be one of the 4 judges for the ultimate Soup Challenge™ at Le Cordon Bleu – The Cambridge School of Culinary Arts that took place March 5, 2011. Each of the five NE finalist’s homemade soup recipes was paired against one of New England Country Soup’s popular flavors for a comparison of nutrition and taste. The lucky winner would win a weekend for two in beautiful Martha’s Vineyard.

M. Peter Thomson, President of New England Country Foods LLC, served as gracious host and MC for this event, which was open to the public. It is obvious that he has a true love for the art soup making and his support and enthusiasm shown towards each of these amateur soup crafters was contagious. In the stunning backdrop of the sate of the art test kitchen at Technique the restaurant at College of Culinary Arts, the winner was determined. Laurie’s Light & Hearty Roasted Corn and Native Shrimp Chowder was the favorite!

Who needs a chowder full of fat and calories when you can enjoy this delicious chowder without guilt? Not me! This rich hearty chowder has all of a chowder with cream but is surprisingly low in all that is bad for you. In my recipe I use the native Maine Gulf shrimp but if it is not Maine shrimp season then any shrimp can be used.

Also, if corn is in season, substitute fresh for frozen. This chowder is a big hit with my Dad as it uses evaporated milk instead of cream, just like his Mom used when she used to make her famous Essex Clam Chowder.

I hope you enjoy it!