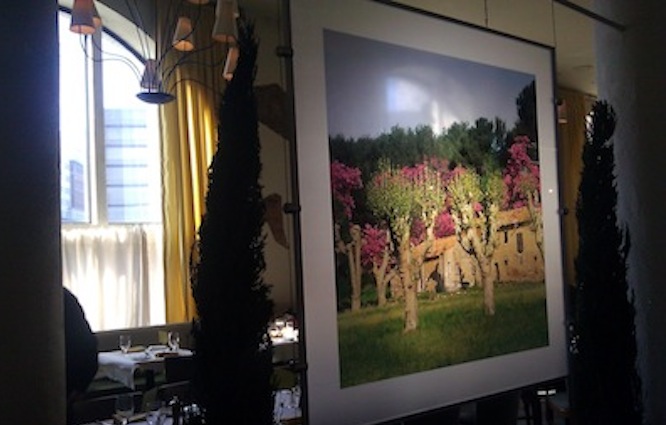 Crediting it’s website, Mistral’s name is  “inspired by the wind that sweeps through the South of France.” What better day to sample their classic French Onion Soup than on a unseasonably spring like day in early February as the light winds followed my colleague and I down Columbus Ave in Boston.

On this non descript part of this street look for the large, glass doors set back from the hum of the Mass Pike below. They open to an interior that is both elegant and stately,  yet warm and embracing. Bathed in the late day sunlight this open-air restaurant is truly an idyllic dining spot. The massive floor to ceiling windows and distressed brick walls gives this restaurant an inviting, truly Provencal feel.  Large glass framed images of the South of France act as a backdrop to the production. There is quite the diversity of service staff, from the sprightly, youthful faces of students to that of the refined, seasoned staff. They come together seamlessly to orchestrate the delivery of food.

Opened in 1997 this is a favorite choice among many for special occasions and business gatherings. Chef Jamie Mammano’s the Provencal-inspired chef, serves up some of the most delectable gifts. The menu is not overwhelming in it’s choices but has a selection that would appeal to all tastes.

I was there for the  French Onion Soup, which is served in a gruyere pastry crust. This version is gorgeously presented, and perhaps slowly nurtured over time to give the broth a depth of flavor and a pleasing, silky texture. The gruyere crust is delicately flaky, soaking up hints of cognac with the deep taste of onion. Upon asking, I am told that Salignac cognac is used in  this version of the classic. This makes perfect sense to me as a hint of caramel gives the broth depth and flavor redolent of caramelized onions, one of my all-time favorite flavors. Chewy and crusty, their bread selection is perfect for dipping, and can be enjoyed with their toppings and butter, which change seasonally.

Upon finishing this soup I found it necessary to take a needed break (I could have cat napped on our centrally placed corner booth ) before feasting on a customer favorite, sushi grade tuna tartare with crispy wontons, ginger and soy. It was a perfect follow up to the rich soup, as it cleansed the palette but held enough of a punch to stand on it’s own. The fresh tuna was enveloped  in pile of thin crispy wontons. I unfortunately had no room for a sampling of the beef tenderloin and mashed potato thin crusted pizza with white truffle oil, which my colleague happily devoured. As our plates were cleared and we glanced around us at the humming activity I realized that I had not photographed the soup!

Trust me, the soup was divine and the service impeccable. Mistral winds are beckoning.