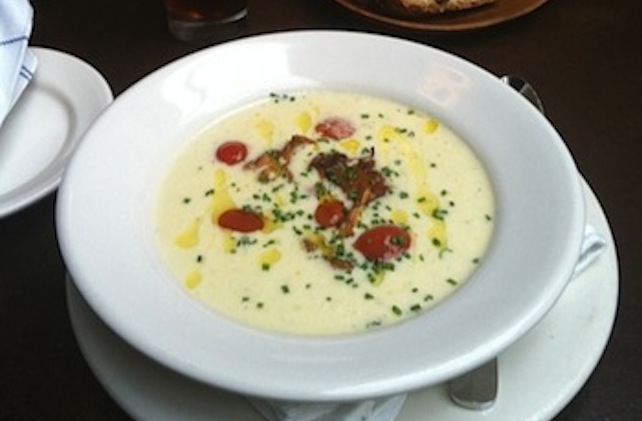 Talking to Steve Johnson, the gentle and clever chef at stylish-but-casual Rendezvous in Central Square, Cambridge, I’m impressed by his devotion to community, to local sourcing, and to good old-fashioned home economics. He lets me in on one of his secrets (no secret, really; he’s more than willing to share recipes and kitchen tips): when they boil potatoes, they season the water and add garlic. Rather than dumping the cooking liquid, they use it to enrich their other stocks and soups. He’s not going to let any of that flavor go down the drain.

The room is quiet (soft bebop) on a very early Tuesday night. From my perch at a cement bar the color and texture of fine leather I can watch the passing parade of Central Square, one of the most eclectic crowds in the Boston area, or gaze at the work of local artists displayed on honey-colored walls. (I also note the small, hand-lettered bottles of what I can only assume are custom-made bitters for the restaurant’s ambitious cocktail program.) The room starts out bright and airy; as the sun goes down, the tone becomes warm and intimate.

I content myself with a rye beer, just the right amount of hops with a sweet nose. The bread basket contains, besides slices of a good crusty loaf, a rosemary flatbread that is positively addictive.

I seem to be on a roll of catching corn soups just as they’re heading off the menu. (The restaurant changes things up about eight times a year, with lots of tinkering in between.) Rendezvous’ vegetarian version sports a pile of chanterelles and roasted tomatoes, with a sprinkle of olive oil adding a quiet grassy note. The corn flavor is subtle; the soup is roughly pureed, maybe a little salty, home cooking re-imagined with fine ingredients. The best spoonfuls combine all the ingredients, with the earthy mushrooms, sweet corn, and tart tomatoes all playing off each other.

Gnocchi with suckling pig, the starter that follows, is not a soup, but could almost be one. Light and fluffy pillows and shreds of tender pork nestle in a shallow bowl of broth, a woodsy brew of herbaceous pork and mushrooms (again a little salty, but incredibly flavorful), spinach, and Piave cheese. As I tilt the bowl to get every remnant, it reminds me of Sunday pot roast dinner. Rendezvous offers just the honest, home-spun kind of meal we like to encounter as autumn comes on. 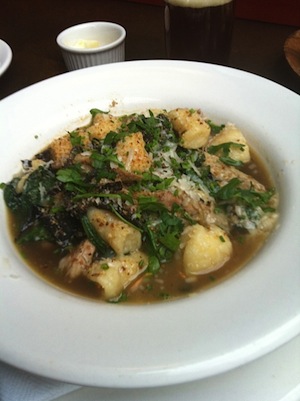