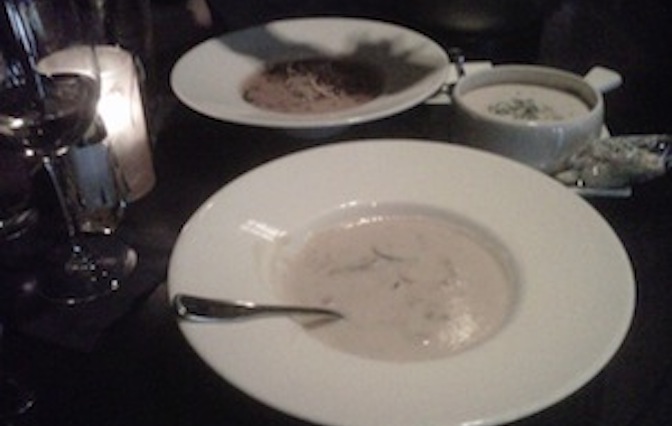 After eating and having a few drinks at Anthem, located in Boston’s Faneuil Hall, I will definitely be adding this casual-chic destination to my list of “go to places” in the city.  The handsome, dark wooden tables and large wrap around bar are complimented by greenhouse-like windows that are a people-watcher’s delight. Anthem Kitchen & Bar maintains the ideal balance of a modern and classy environment without disregarding the character and history of its notable Boston location. I walked into Anthem on a cloudy, unseasonably chilly Wednesday night in May (sounds like a perfect day for soup, doesn’t it?) and grabbed a seat at a high-top table in the aforementioned sophisticated bar area.

I sipped on a chilled, crisp glass of Sauvignon Blanc as I waited for my soup to be brought out. The service was attentive and welcoming, and after a couple of sips I was presented with my soup. I was served a crock of Anthem’s award winning clam chowder, a bowl of grilled corn & lobster soup and their soup of the day which was a pureed sweet pepper and corn soup.   After tasting the chowder, there is no question in my mind as to why it earned the title of “Best Chowder” at the 2010 Boston Chowder fest. The chowder was silky, but not watery; and heavy, but not too thick. There is a decent amount of clams and hearty potato chunks that add to the excellence of the texture of the soup. The flawlessly salty flavor combined with the smooth yet substantial consistency created a robust flavor in every bite. Being a Boston area native, I can’t help but say that this chowdah is wicked good.

Next at bat was the roasted corn and lobster soup. The burnt orange, bisque-like texture was savory to say the least. Liberal chunks of lobster and bits of corn populated the hot, smooth broth. I am really picky about how I like my lobster prepared and can be weary of the texture at times but these chunks of lobster were just right. The lobster was tender with enough firmness to keep it from tasting mushy.

Additionally, I sampled the pureed sweet pepper and corn soup which was very simple but tasty. The flavors of the soup were very fresh and clean. The simplicity of the combinations of flavors worked well together and I would definitely order it the next time they offer it as a special.   My evening at Anthem was overall, very enjoyable. The rest of the menu looked tempting so my friend and I decided to split a Margherita wood grilled flat bread pizza and order another glass of wine. The small pizza was fresh, tasty and perfect for pickin’.