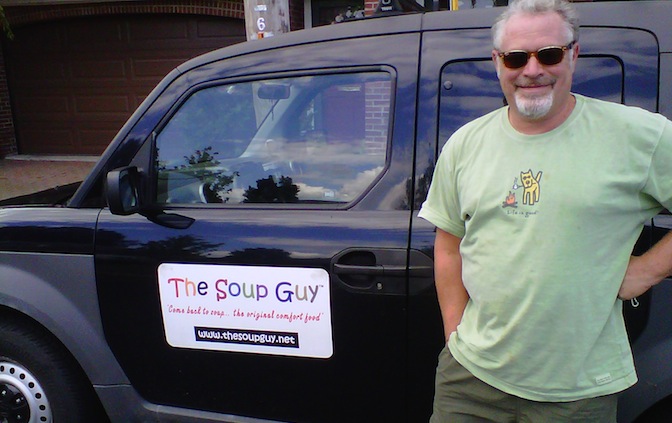 There’s this guy who makes soup.  He drives a soup-mobile.  He is a proper chef who selects yummy, fresh ingredients from local sources, brings them to his kitchen and uses the science and magic of cookery to create 100% gluten free soupy goodness.  Then the Soup Guy of Dover, NH brings his wares to farmer’s markets and retail shops where they are frequently sold out.

The Soup Guy, aka Curtis Gould, has a steady following.  He can be found on most Saturdays selling his soup and chili at the Wentworth Greenhouse Farmer’s market; Thursdays at the Manchester farmer’s Market

His website, thesoupguy.net, details the other locations where you can find his delicious concoctions.   We sampled three of the Soup Guy’s offerings:  Sweet Corn Chowda, NH Angus Beef Chili and Lentil, Blackeyed Pea & Veggie Soup.  They were so good that, in retrospect, I could have had them all in one day; breakfast, lunch then dinner!

Of course I’ve had these style soups a thousand times in hundreds of variations.  The potential for mediocrity was high.  While warming the soups I studied the labels and got my first hints as to the genuine quality inside.  The corn chowder offered all the normal ingredients.  But then, center cut bacon!  Sea salt! Red pepper sauce.  The Beef Chili included NH Angus Beef, roasted zucchini, squash and eggplant as well as gluten free tamari and blueberry juice!

In a memorable episode of the savagely funny British comedy Chef!, Gareth Blackstock is railing at his quaking kitchen staff about the essence of cooking: “Ingredients!!” he shouts.  Ingredients, indeed.     This Soup Guy builds his soups the way you or I would.

He decides on Beef Chili and then he shops for ingredients.  If the zucchini looks particularly good he buys it, roasts it and adds it to the chili.  The results are remarkable.   The Corn Chowda bursts with corny (in a good way) goodness.  This was no creamy corn.  This was kernels of brightly colored corn with a nice peppery twang playing off of sweet smoky bacon.   The Beef Chili needed nothing (well maybe a sprinkle of chopped green onions and buttered bread). It had a nice light, sharp finish that had me greedily digging for more.   The Lentils, black eyed peas and veggie soup tasted garden fresh and satisfied my yearning for a filling lunch.

You know how late Autumn Sundays and Winter snow days tug at you for a fresh bowl of soup?  I say stock up now on the Soup Guy.  His work has a place in my freezer.   Check out the Soup Guy on Facebook at Facebook.com/thesoupguy