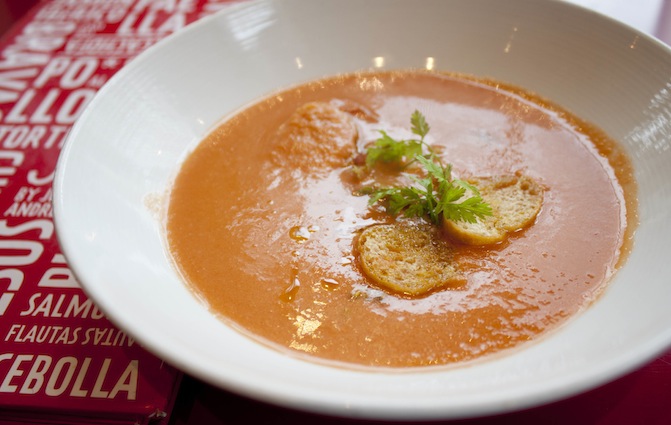 José Andrés is arguably the most famous chef in the whole District. In fact, it’s hard to be in Penn Quarter without walking by one or two of his restaurants. There is Oyamel, a fun, Mexican restaurant where you can get a mound of guacamole made right at your table, or Minibar, an avant-garde eating experience that combines food with art and science. At America Eats Tavern, a restaurant that reimagined America’s classic dishes, I had a deconstructed version of eggs Benedict, featuring a hollandaise foam, instead of the traditional sauce. (If you missed this limited-time restaurant, never fear, it will be reopening in Tyson’s Corner in the winter.)

All of this is to say that I knew I would be in for a treat when I went to try the gazpacho at Andrés’ Spanish tapas restaurant, Jaleo. Like Oyamel, Jaleo has a vibrant interior with a lot of open space. Floor to ceiling windows cover two sides of the restaurant, giving those on the inside a great view of tourists with maps ambling down the sidewalk and the DC professionals who walk briskly by them. And to my surprise, during my own people watching, I saw José André himself showing some friends around the neighborhood, clad in a Star Wars-themed t-shirt that said Star Chef on it.

Yes, I knew I was in good hands as I waited for my gazpacho. Gazpacho is cold soup that originated in the Andalucía region of Spain. During the summer months, it is a refreshing meal that, according to the cook that I talked to, the staff cannot get enough of. As is the style of José Andrés restaurants, the gazpacho involved a presentation at my table. First I was given a bowl of garnish—chopped tomatoes, cucumbers, peppers, and garlic, and thin slices of crusty bread, drizzled with olive oil. After discussing the ingredients at length with me, the manager poured the pureed red gazpacho over the garnish.

The puree is made of all the same ingredients that are in the garnish, including the bread, which was a surprising, but integral, part of the soup. The bread gives the gazpacho weight, and prevents it from being watery and thin. The crunchiness of the garnish plays well with the smoothness of the puree. And the special ingredient, sherry, balanced the acidity of the tomatoes, and gave the soup a little kick. It was delicious, and I ate it all before the manager came back to ask me how I liked it.

Jaleo is bustling most nights, and in the summer, they open up tables on the sidewalk on E Street. I imagine that if you are brave enough to eat outside during a DC summer, there would not be a better dish to eat than this refreshing gazpacho. Stop by Penn Quarter and check it out—maybe you can catch your own glimpse of the Star Chef. 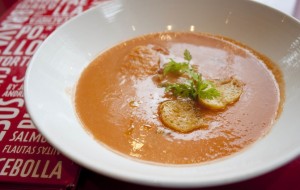