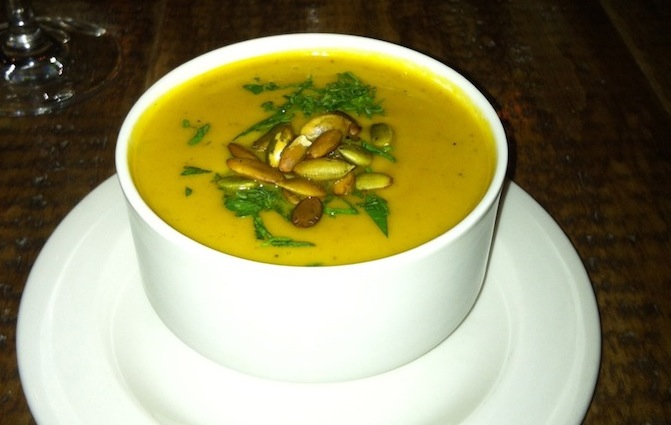 Chef/Owner Chad Burns hails originally from Michigan, where he grew up farming, hunting, and foraging. So local (and unusual) sourcing is not only second nature to him, it’s part of his identity and that of his excellent restaurant, Farmstead Table. He’s also dedicated to earth-friendly practices, both in the food he prepares and the way he builds and runs his shop, right across the street from the Newton Center T station, just outside of Boston.

His Lobster Bisque with juniper was originally intended to be a special, but it has developed such a loyal following that Chef Chad can’t take it off the menu. Besides, he tells us, it tickles him to make something this great out of water. In the preparation, he makes sure every bit of lobster goes into the bowl, making it worth the price. It’s a light bisque, getting its richness from concentrating the broth rather than overusing the dairy. Butter is there to bring out the lobster’s sweetness, which isn’t hard when the lobster is cooked to such perfect tenderness. And the juniper—which he forages himself—is as lovely an aromatic as it is surprising. 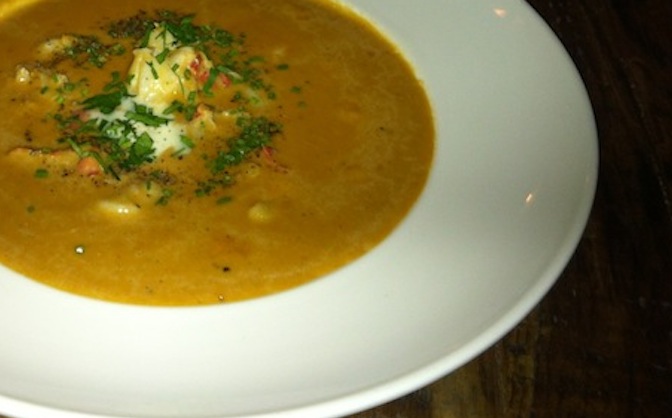 Soup is important, Chef Chad says—if you can’t season a soup well, you won’t be able to season a steak. So he makes room on the menu for several, and changes them up often. In the summer, he’ll make a fresh corn chowder or a chilled borscht. His improvised green heirloom tomato gazpacho won first place at Allandale Farms’ heirloom tomato festival (he made both smooth and chunky preparations).

This night, in addition to the Lobster Bisque, he offers us two vegetarian fall soups: Parsnip Soup with roasted hazelnuts and pomegranate reduction, and a Sweet Potato and Butternut Squash Bisque with toasted pumpkin seeds and warming spices. Because my dining companion is vegetarian, and I’ve already scarfed down the Lobster Bisque, I (reluctantly) let her have the lion’s share of the parsnip; I handle the sweet potato/squash potion. Clove, cardamom, cinnamon, and allspice really do have a warming effect as I dip my spoon again and again in the not-too-sweet bowl. It’s like a dream of pie if pie dreamt of going savory, a dream I eagerly share if this is the result.

That decision to give up my rights to the parsnips was not the brightest one I’ve ever made. First off, I love parsnips, and second, this bowl was (with no shade thrown to the other two) the first among equals. Parsnips from nearby Hadley, combined with celery root and onions, come together to make a truly perfect soup. The parsnips are sweet and incredibly fresh; there’s a hint of tartness from the pomegranate reduction; the roasted hazelnuts provide savory notes and crunch. This is smart, smart soupmaking.

There are many other delights to be had at our rustic planked table, beneath the farm-style tin lights, among the mason jars that serve as water glasses: there’s Tom, the friendly bartender, who makes a first-class Aviation cocktail and convinces us to get an order of Brussels sprouts. He describes them, aptly, as “fried vegetable candy.” They appear and then disappear like magic. We’re also lucky to have arrived early enough that there are still popovers. They serve these at lunch, when they do a soup, salad, and popover special. Evening diners originally had to make due with whatever popovers had survived the lunch rush. Now they make a second batch for dinner, but it’s first come, first served, and I’d be happy to put an elbow in the eye of any patron getting between me and the last one. The excellent house-made spelt bread is ample compensation for the latecomer. 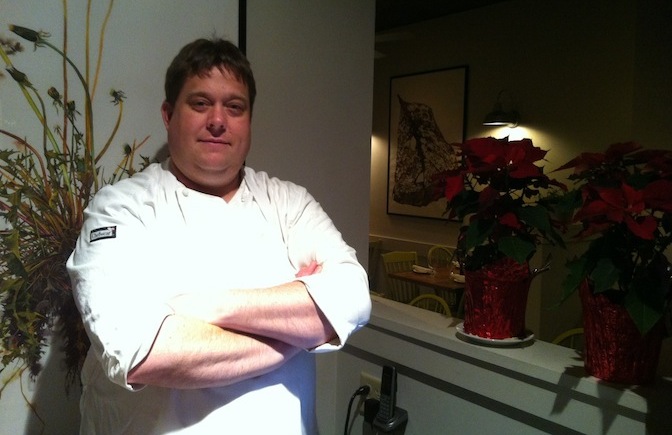 The bright, whitewashed room is quiet, the music blissfully kept low, which will be a good thing for the Hangover Brunch planned for New Year’s Day. (One hopes there will be popovers.) There are only about a dozen or so tables, so reservations are recommended both for special events and evenings. Go and sample their wares, and their wisdom. I’ll end with two examples of the latter: Bartender Tom says: “We’re humans. We eat carbs. And butter.” And Chef Chad says: “It’s just food. It makes you happy.” Wise words indeed.