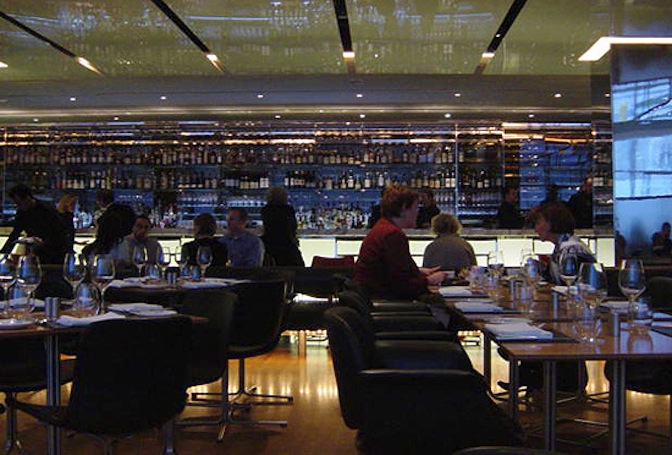 Chef Gabriel Kreuther, the executive chef at The Modern, was born in the Alsace region of France, north of Strasburg. He shares these roots with my grandmother, who was born in the small village of Colmar. I was curious about his epicurean roots and how they would transpire at an upscale Manhattan restaurant housed in one of the greatest Modern Art Museums in the world. I had been told that his small plates of Alsatian cuisine rivaled that of many of France’s top chefs. I of course was there for the soup and Cindy Sherman’s intriguing, provocative larger than life show.

Wild Mushroom Soup with Toasted Chorizo Ravioli was on the menu and I was thrilled to sample this culinary piece of artwork. Served in a classic cast iron bowl, this soup is an eclectic mix of flavors. Thin in texture, yet foamy and bold, it held a deep, earthy flavor. It was immediately obvious to the palette that these mushrooms were harvested by the best. The toasted chorizo raviolis mimicked fried wontons, enveloping tasty pieces chorizo, perfect for dipping in the frothy soup. Overall, I found this soup a welcoming remedy for the pelting rain I had left outside.

The overall design at The Modern is Bauhaus. The bar is lively and bustling. The huge and ethereal forest that glowed near by was calming. German artist, Thomas Demand created the photograph, entitled “ Clearing”.  The atmosphere is casual and hip, and the service superb.  The plates are small but prefect for sharing. This is a welcoming respite from the exceptional collection of art that screams for attention behind the walls.