Always homemade, this was the first place where I saw a soup’s creation on a regular basis – Double Rainbow built their soups from fat up.  Here, I discovered that garnishing soup meant much more than crumbling saltines on top of clam chowder.  Sometimes the accent of a garnish was essential in creating the finished flavor the saucier had imagined. Sometimes the garnish was part of the recipe that was not meant to be cooked in the soup or cooked separately and added at the end.  Heating cilantro or mint in a soup muddles its sharp flavor, if the texture desired for a soup includes crunchy, freshly made bacon cracklings, cooking them with the liquid will only soften them.  Added cold, at the end, correctly completes the original vision.

All of Double Rainbow’s soups were excellent.  Most of them were very common but exquisitely made – like their green chile stew, their chicken and red chile stew, their clam chowder, or even their split pea.  However, sometimes we offered a soup more adventurous.  One of which was their Black Bean soup.  This was a mostly puréed affair, that for over ten years I struggled to figure out.  As I had never seen the recipe and my palate was still young, therefore inadequate to determine a specific flavor out of a complete dish, all I had to go on was the memory of its unique seasoning.

In other words, I was screwed.

I will even admit to one sordid evening where I attempted to create this soup at home.  This abysmal undertaking was one of the few concoctions I have made that was dumped straight from the pot into the sink disposal.

One day, after working at the Hopvine for three years, I unwittingly recreated that soup, or at least what I remembered being that soup from Double Rainbow.  The flavors that I couldn’t pick out at the time were orange, cinnamon, clove and cilantro. These were four very common and familiar spices and herbs for me, as I grew up in New Mexico, but in combination they made for something mysterious and exotic.  While I owe that soup a debt of gratitude because it furthered my desire in the art of cooking, I believe that my Brazilian Black Bean soup surpassed my memory of Double Rainbow’s original creation.

After learning the kitchen job, in which I was thrust, I decided that I wanted to create Double Rainbow’s soups.  I wanted to further myself in the arcane depths of the kitchen and its wizardry. Unfortunately, Mark and Jean successfully avoided giving me the job for nearly three years.

In the end, I suppose it was for the best, after all, I wouldn’t have been able to practice my atrocious cruising skills if I was constantly kept behind the scenes.  Remember I was young, dumb and misanthropic. 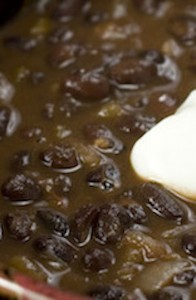