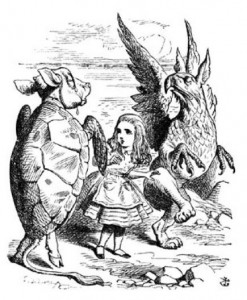 One of many adventures Alice has in Wonderland is listening to the song “Turtle Soup” as performed by the sobbing Mock Turtle Beautiful Soup, so rich and green, Waiting in a hot tureen! Who for such dainties would not stoop? Soup of the evening, beautiful Soup! My recent adventure wasn’t quite as surreal, but my delicious bowl of Turtle Soup at Acadiana last night was no less thrilling.

The restaurant treated me to its Trio of Soups: turtle soup au sherry (far left), roasted sweet corn and blue crab bisque (middle), and smoked chicken and andouille sausage gumbo (far right). As if I ordered a full bowl of each, the server tipped out three covered pots into three shallow dishes—first the soup, then the plop of garnish, remarkably untouched or drowning in the liquid that topped it. My turtle soup was garnished with chopped egg and flecks of chive; the bisque gave way to large chunks of lump crabmeat and whole kernels of crunchy sweet corn; and the gumbo was crowned with rice.

My first impression was that “trio of soups” was all-wrong; at the very least, this was a trio of stews—perhaps a trio of gravy (in the best sense of the word). Let me describe why these…these…sumptuous swallows are so difficult to pin down. The turtle soup is really a braise-cum-brisket fork-tender happiness that defies my small vocabulary. The turtle meat was toothsome while its “soup” was slightly sweet (which I assume comes largely from the tomato base, but maybe some clove or allspice as well?) balanced with some citrus, which gave it a bit of twang.

It wasn’t until I ordered a full serving of Turtle Soup (nutin’ wrong wit dat cher), that I got the traditional side of Sherry “to taste” (not drunk as a shot—it’s added to the soup). This was largely ceremonial; there was barely enough to put in my eye. Perhaps Chef Tunks didn’t want us to ruin a perfectly balanced dish by adding too much fortified wine, which clearly already had some, or he caught wind of my reputation.

While a crab bisque might sound pedestrian after all that turtle fanfare, I can testify to its wonderful flavor and textures—velvety pillows of crab meat, tender but still crisp kernels of sweet corn, a brunoise of bright red bell pepper, celery and onion. What I really liked was the heat of this soup—presumably cayenne. It doesn’t bring on a fire in your mouth; it’s more of a tall backstop to a rich, creamy base that helps you deny the amount of butter therein.

Last, but by no means least, was the gumbo. Unlike the bisque, this dish was spicy thanks to the andouille sausage, which also lent the gumbo a nice smokey flavor. Taken together, with the chicken, rice and scallions, it was like a $9 plane ticket to New Orleans.

I have to admit; I was really torn when it came to deciding what bowl of soup I wanted to order. According to The Picayune’s Creole Cook Book, “The special quality of turtle soup was said to be that it did not ‘cloy’ [and] the diner was considered best able to enjoy the numerous rich dishes to follow.” Considering I was still slated to have the charbroiled oysters and roasted duck, I feigned no other choice but I would have been more than happy had I picked either of the remaining two (which I will next go round). 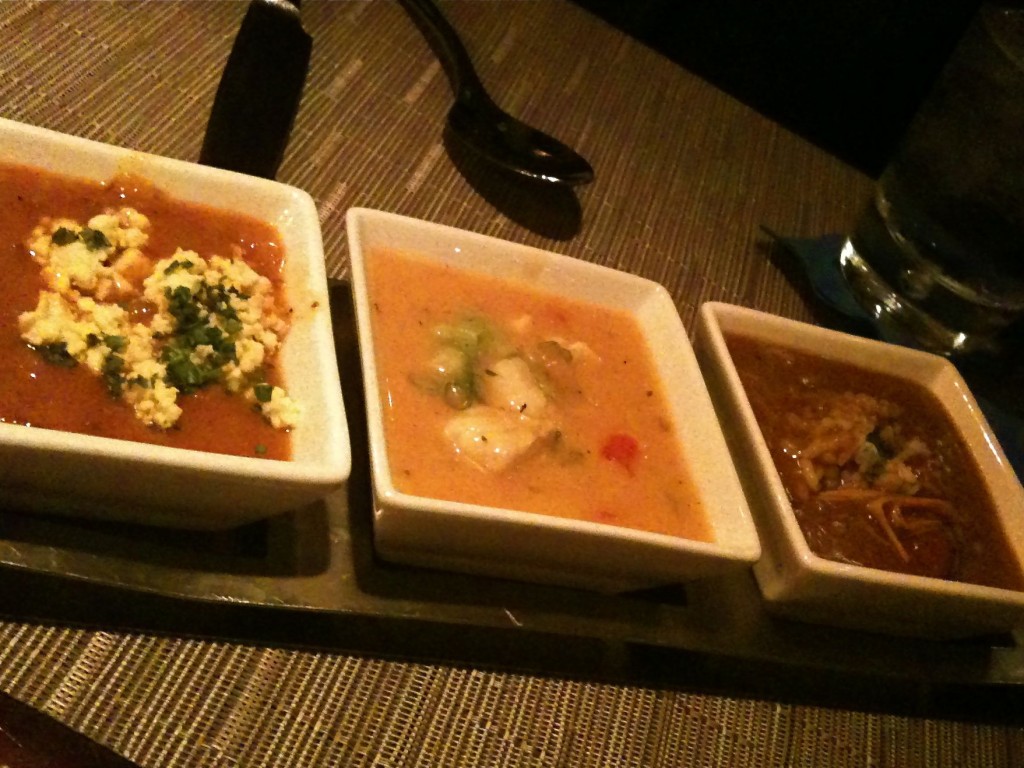