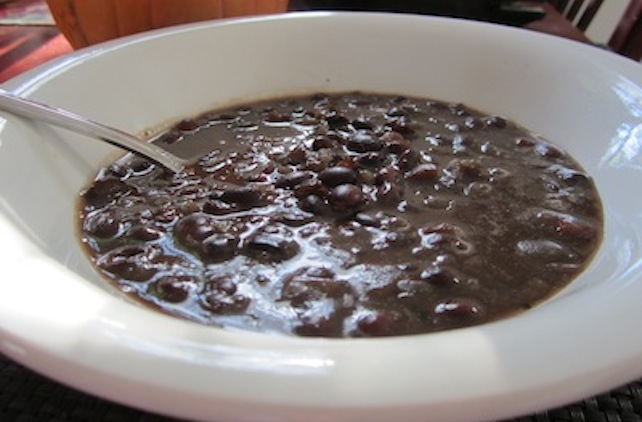 I had the opportunity recently to try several flavors of New England Country Soup.  The Cambridge based company offers a selection of popular soup flavors in ready to heat pouches that are shelf-stable.  Being a vegetarian, I was looking forward to sampling the Lentil Soup and the Caribbean Black Bean Soup. Both soups were easy to prepare.  I chose the stovetop method, pouring the contents into a saucepan and heating. The pouches are also microwavable.

The first soup I tried was the lentil. I must admit that lentil in general is not one of my favorites (gasps from fellow soup lovers.) However, my husband Mark – a meat eater – loves it, as it is has an almost ‘beefy’ stock flavor.

One of the first things we both noticed was that the soup was lightly seasoned. Indeed, a quick check on their website reveals that they strive for their soups to be low sodium for health reasons, but to remain flavorful.

At first I thought: it needs more pep, but several spoonfuls in and the natural flavor of the lentils came through.  Hmmm… I might actually like lentil soup!  I decided to add some black pepper, and that notched up to my enjoyment. Mark on the other hand finished his soup and needed no addition.  Bowl was clean.  He loved it. It looks like this is something I would buy for him – and the abundance of vitamins that naturally occur in lentils such as Vitamin A, C, iron, and high protein and fiber – make this something I’d be happy to see him eat.

Next, I moved onto the Caribbean Black Bean (NEW). Unlike lentil, I ADORE black bean anything, and have become quite good at preparing them myself. So, my standards are high in terms of my black bean expectations, we’ll call it BBE.

My BBE was met.

This soup has wonderful flavor! Imagine being whisked away to an island, and into a pot of black beans such fragrant spices such as allspice and cumin simmer away.  Ahhh. They even add a slight touch of jalapenos. And I do mean a slight. Trust me, this is not a spicy soup.  They’ve put in just enough good things to give it a layered flavor that satisfies.  I love this soup and would buy again and would even serve to company.

So overall I would say this product rates high in terms of ease of preparation and taste, and I love the low sodium tenant.

Ah, I wish life, as a modern day soup lover, were as easy as heating up a pouch of soup.

New England Country Soup is available at major supermarket chains across the U.S. 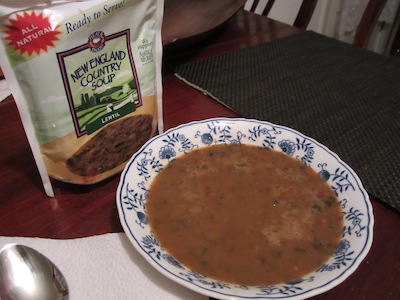