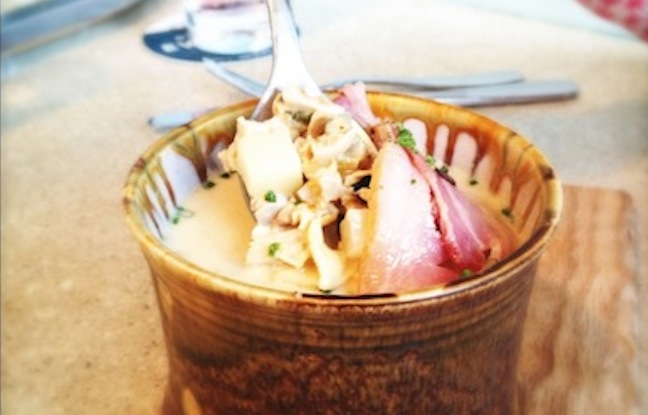 Can you imagine going to Maryland and not finding a crab restaurant? It seems almost unimaginable that Portland didn’t have a true oyster bar. The restaurant is owned and operated by Arlin Smith, Andrew Taylor and Mike Wiley who are all co-owners of the esteemed Hugo’s next door to Eventide.

Eventide is a bright, welcoming restaurant with large, floor to ceiling windows looking out on Middle Street. The interior is a cool blue color with picnic tables and seats around the bar; an unpretentious place to hang out. The main focal point in the restaurant is the enormous custom made granite bowl filled with ice.  The custom creation houses up to sixteen different varieties of oysters on any given day. Each variety is cleverly marked with a wooden stick and the name written on it jutting out of the ice. 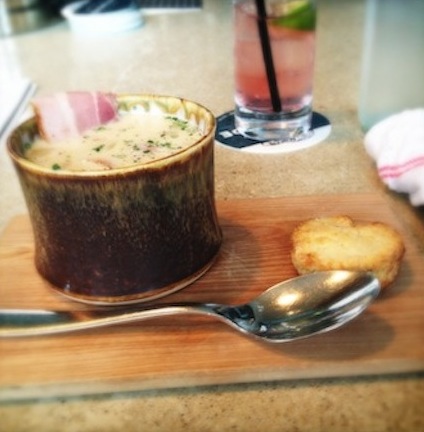 My friend Kim and I were there for a purpose though, and that purpose was New England clam chowder. Arlin said a lot of consideration went into just what version of the chowder they wanted to make. Fortunately, they ran into a surly fisherman one morning and asked him his opinion of how true chowder was made. He told them the key is evaporated milk. Chowder isn’t supposed to be thick and milky, the flavor is supposed to come from the clams. So they set out to create their own version. They start with cooking onions until they are golden in color, then they add kombu (an edible seaweed), water, quahogs and steamers. They simmer this so the flavor really develops and takes on the clam juices. The broth then gets strained, they rinse and chop the clams and fold them back into the liquid and add confit potato pieces and evaporated milk. The presentation is rustic with a large handmade pottery bowl sitting on one end of a wooden plank with a house made biscuit sitting on the other. There are two large pieces of house cured salt pork that are thinly sliced and draped over the side. I really enjoyed this soup. It was packed full of flavor yet not heavy from unnecessary cream. There are plenty of clams (which are tender and not chewy in the least), potatoes, and onion in each bite. Simply how real New England chowder should taste. 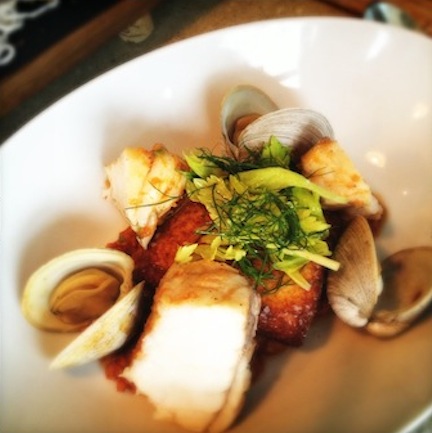 Next Kim and I tried the charcuterie tray. It came with 4 different house cured meats, cornichon, pickled tomatillo, and coarse grain mustard — all to be enjoyed with their house made lavash crackers. For an entrée we shared monkfish which arrived in a large bowl. On the bottom was a pureed chorizo that was then topped with a large piece of pan-fried polenta – this had tons of flavor. On top of the polenta was four large pieces of monkish accompanied by four mahogany clams. The presentation was colorful and artistic and the flavors were so well balanced with the spiced chorizo, the crispy fried polenta, and the delectable fresh monkfish.

Eventide is a restaurant not to be missed whether it’s for a beer and oysters on a Saturday afternoon or a full dinner to experience all it has to offer.  The owners are innovative and continually looking for new creations. Just recently I saw that Eventide paired up with Bunker Brewing in Portland and created an oyster beer called Dirty Pearl. Recently chefs Taylor and Wiley won Best Chefs in New England from Food and Wine Magazine and the restaurant was also included in Find. Eat. Drink.’s 50 best restaurants of 2012. All this acclaim has been well placed but go see for yourself; stop in, pull up a stool and enjoy. 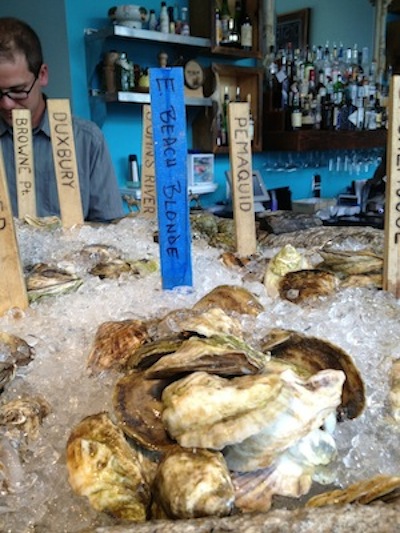 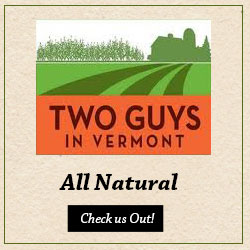