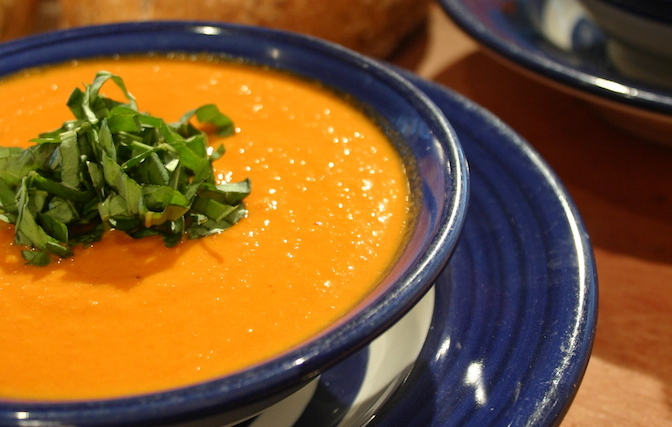 The average summertime temperature in Tucson, Arizona is 100 degrees Fahrenheit , but a rep for Tucson-based bakery and sandwich shop Beyond Bread says the chain sells plenty of soup year-round.

While northerners may scoff at Tucson’s average winter lows in the 40s, the weather is a little more conducive to eating soup now.

True to its name, the menu at Beyond Bread offers a much broader range than simply bread. In fact, Beyond Bread has a rotating soup menu with two standards — Tomato Basil and Chicken Tortilla – that I was able to try on a recent visit, along with a generous selection of breads (its breads are also certainly worth a try…but that’s a post for another blog).

Beyond Bread’s Tomato Basil soup is likely the creamiest I have ever tasted. My sister likened it to the sauce in Penne alla Vodka, which is probably the most apt description I can come up with, minus the vodka. The pureed tomato soup came with a garnish of chopped basil, which was a nice touch, even if the basil on my spoon hit my chin a couple of times. Just keep a napkin handy.

My Tomato Basil soup was served with a grilled cheese sandwich for dipping, which Beyond Bread serves with a substantial hunk of provolone, sharp cheddar of Swiss cheese on white bread. (I should confess I was initially nervous when the rep mentioned grilled cheese as I HATE American cheese, but I should have known better.)

While the Tomato Basil soup is mellow and comforting and unassuming, the Chicken Tortilla soup is much more vibrant and aggressive with whole corn kernels, carrots, cilantro and sizable chunks of chicken. Fans of chiles will rejoice — this is a soup so imbued with chiles that the bouquet is reminiscent of almost nothing else. (I love chiles, so I was happy.) The soup is also a little spicy, but not so overwhelming that it isn’t an enjoyable bowl. 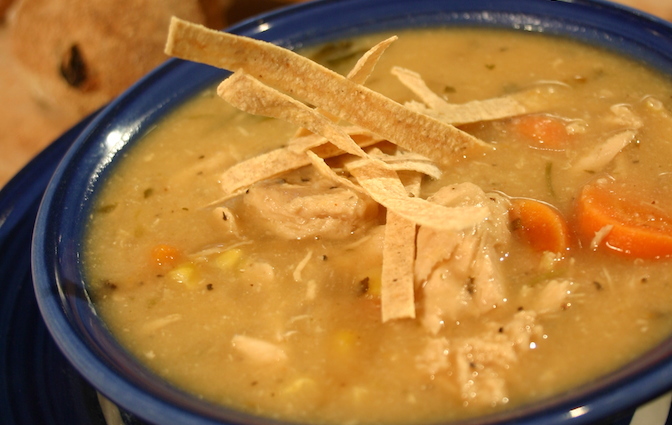 Chicken Tortilla is garnished with tortilla strips. Mine were a little soggy, but that was my fault because I was distracted by the Tomato Basil soup first.

Other soups at Beyond Bread with varying availability include Beef Barley, Clam Chowder and Cream of Chicken and Dumpling. A Gazpacho makes an appearance in the Spring.

The Beyond Bread rep says the brand makes its own chicken stock and has even a special permit for cooling and transporting its soups after they are made at its Speedway location. (Beyond Bread has three locations in the Tucson area.)

The bottom line: This is clearly a restaurant that takes time to use quality ingredients and prepare a flavorful bowl, so it makes for a worthwhile stop, even if soup isn’t the first thing on your mind in the desert.