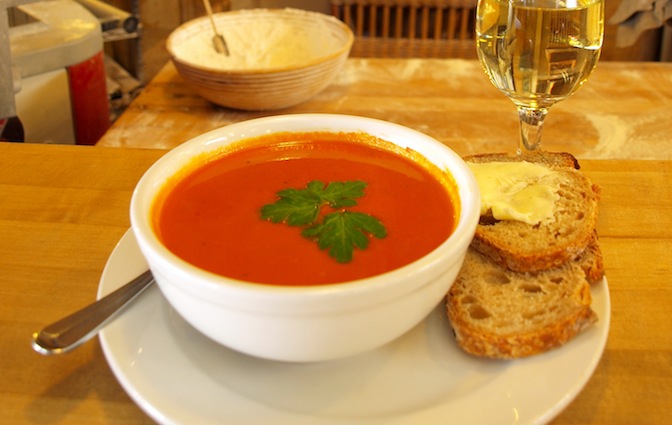 Bakeries; Portland has plenty of them. As a matter of fact, Stumptown has some major headliners in that category. And I frequent them often. I visit them on weekend mornings, I stop in for weekday lunches, and I even regularly lead Epicurean Excursion Tours into one of them. It’s safe to say that I encounter more than my fair share of high quality baked goods on a weekly basis. Last week I was hosted by the St Honore Boulangerie in NW Portland for a soup tasting; a tasting that turned into a 2 hour long sampling of a mix of the many wondrous products that are prepared in their oven. Speaking of which….

The oven used at the St Honore Boulangerie is a clay firebrick bread oven common in traditional French baking. The bricks are made from the kaolin earth of the town of Larnage, located in the foothills of the Rhone Valley. The quarries in the area have been in use since the Roman times. The refractory properties of the clay have a natural moisture retention which transfers the heat evenly, working some serious old-world magic on whatever you decide to stick in the oven.

There are no big cooking stoves at St Honore. Instead, soups are made from scratch, by using their one and only bread oven. First, they slow-roast or braise vegetables and meats in the oven, typically for 2 to 3 hours. This process not only makes the ingredients tender but brings out their natural sweetness and flavors, giving soups richer and more complex notes. Ingredients are then carefully mixed together and cooked in the oven, slowly. The end result is an offering of soups that contain true depth and honest richness.    On the morning of my visit I sampled four soups:

(Beef, Mushroom and Barley Soup)  Beef, leeks, celery, carrots and onions are braised with red wine and thyme. Sweet paprika and other spices and herbs. The soup is dairy and gluten-free.

(Potato and Leek Soup)  Dominique’s mother’s recipe is a pureed soup made with potatoes and leeks. This traditional soup is named after Antoine-Augustin Parmentier who spread potatoes in France in the 16th century. Unlike other typical Potato and Leek soups, there is no cream added. The soup is vegan, and it is dairy and gluten-free.

Puréed soup made with tomatoes, basil and coconut milk. Coconut milk is used in place of cream. The soup is vegan, and it is dairy and gluten-free.

Made with oven-braised bone-in ham, navy beans, leek, carrot, celery, thyme and fennel.   When you combine the finest local and seasonal ingredients available with the method of cooking employed at the St Honore Boulangerie, even the simplest vegan soups like Potato Leek and Tomato Bisque, served with slices of their signature Miche Banal bread, are soul-satisfying meals. They serve two types of soup every day; one usually with meat and the other vegetarian or vegan.

You might wonder, “With all of our modern equipment and advanced methods, who would bake this way and why?” I’m glad you asked.

Owner and Master Baker, Dominique Guelin, hails from the small Normandy town of Etretat. He learned the art of baking from his father in the family bakery that they lived above. As luck would have it, Dominique had a propensity for the art of baking that eventually landed him the prestigious Meilleur Ouvrier de France (MOF) in boulangerie. This is all making sense now, isn’t it?

In December of 2003 Dominique and his wife, Stephanie opened the St Honore Boulangerie on Thurman Street in NW Portland. There is also a Lake Oswego location on 1st Street. Not to worry though, both locations have their own clay firebrick ovens. 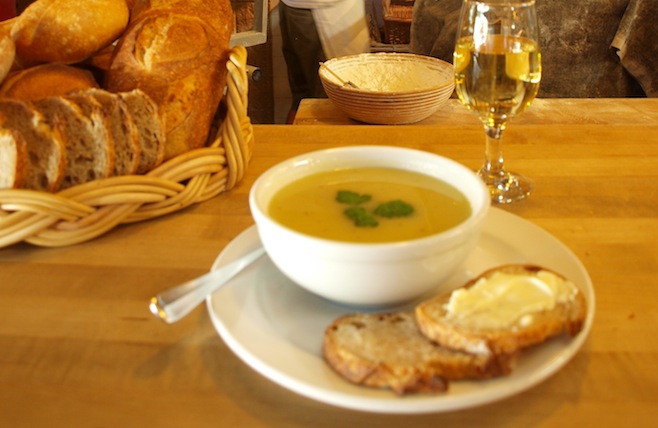