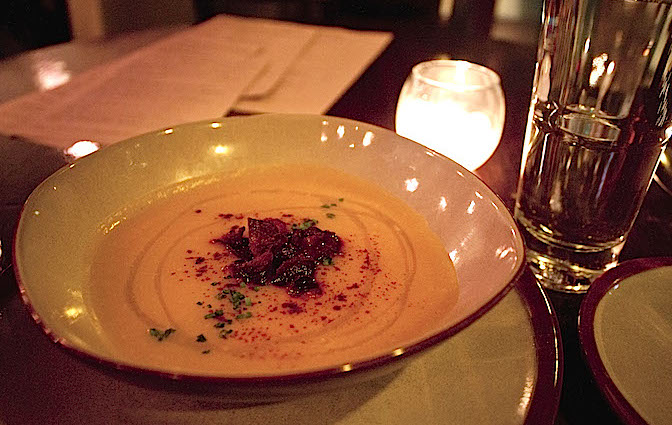 Seattle gets dark in the winter. The sun sets at around 5 and it feels like your night is over even though you have at least five more hours to do things. Good thing there are cozy restaurants like Golden Beetle to spend at least a couple hours at in the evening, enjoying Mac and Cheese Monday or their happy hour or their exclusively gluten-free or vegan selections by candlelight. Located in Ballard—the rapidly growing and changing neighborhood in north Seattle—the restaurant is in a prime location for diners looking for a good place to hang out and eat when it gets dark.

Golden Beetle was opened by Maria Hines, a chef with a strong interest in community work and keeping her restaurants’ food local and organic. She’s even appeared on Iron Chef and battled Morimoto. I was excited when I slipped into my seat by the window to not only eat her food, but to support her causes. The restaurant has an Eastern Mediterranean theme, with red and blue lanterns hanging from the ceiling and a Syrian version of harissa (a hot chile paste) at every table.

I was there to try their butternut squash soup, something I love to make at home. Golden Beetle’s version is made with locally sourced squash, aleppo pepper, beet chips, and thyme oil and paprika. The soup is vegan, which I almost couldn’t believe because it was so creamy. Executive Chef Jason Brzozowy had to convince me that there was no cream in it by explaining the technique of blending the soup with stock and oil. That’s something I’ll be trying at home. The paprika gave the soup a smokiness and the beet chips added texture and a little bit of crunch. With the spiciness of the aleppo pepper and the balancing force of the thyme oil, the recipe is definitely a different take on squash soup—in the best way possible.

The restaurant not only provides many options for any dietary need, but they also have excellent drinks both with and without alcohol. I tried one of their in-house made sodas with my favorite flavor—lavender. They also take their cocktails very seriously, making their bitters and tinctures in house as well and offering classes on how to make them on the weekends. I tried the Honey Badger—made with brandy, honey syrup, cardamom tincture, lemon, soda, and a sprig of mint—which was perfectly sweet.

Golden Beetle is a perfect place to find yourself at 5pm, when it gets dark but you aren’t ready to go to bed yet. I recommend checking out their happy hour that runs until 6:30 or stopping by for soup and a cocktail.