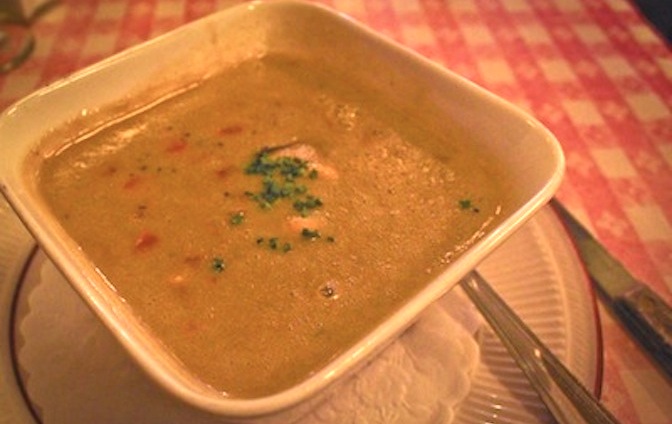 According to Michel Verdon, half of the duo that opened Bistrot Du Coin in Dupont Circle in 2000, a good soup is simple, hot, and accompanied by a good glass of wine with bread and olive oil. As the winter bears down on DC, nothing sounds better than this remedy.

Coming in out of the cold of Connecticut Avenue, my dinner companion and I were greeted with Bistrot Du Coin’s warm, open space, still brimming with Christmas and New Year’s Eve decorations, including disco balls. As we passed a wall of pictures smiling back at us —mostly restaurant regulars—I could tell that this charming restaurant was well loved.    At 6:30, the bar was already full with young professionals and the many tablecloth-covered tables were occupied with couples. Despite the big space, the tables feel intimate, with the buzz of conversation the air. The French accents of many of the servers, the list of French beers scrawled on the mirror behind the bar, the French decorations adorning the walls, and the delicious smells emanating from the kitchen, all made for a truly authentic feel.

The menu had many appetizing options—it was truly hard to make a decision. Plus, many of the dishes are also available in appetizer portions, making it seem possible to try everything.  I would recommend that you do your best. The restaurant’s seafood ravioli was a highlight and the baby artichoke and asparagus salad was simple, fresh and delicious.   Bistrot Du Coin serves a variety of soups. Michel recommends the vegetable soup if you want something light.  On days they have it as a special, he says that you should definitely try the mushroom soup. The French onion soup, a classic and rumored to be one of the best in the city,  is served with a hefty piece of bread with a thick layer of cheese adorning it. I’d heard that the mussels were a specialty of the house, so I chose the soupe de moules safranee (creamy mussel soup with saffron). A French staple, it is a combination of mussels, shallots, red peppers, cream, and saffron. Oh, and how could one forget the butter!

When the soup arrived, I was surprised by the color. Thanks to the saffron, the soup was the shade of a red curry.  With a stir, I could see that the kitchen did not skimp on the mussels. With the first bite, I understood why this soup is a staple. Its velvety texture is the perfect complement to the plump, delicately seasoned mussels. It was just the right consistency and had a smidge of saltiness from the sea. The smoothness was pleasantly interrupted by the crunch and sharp flavor of the chopped red pepper. By the end, I had definitely added a new dish to my list of go-to comfort foods.   Also not to be missed is the dessert menu. I haven’t seen such an extensive and decedent list at a restaurant in a quite some time. Again, I had a hard time deciding between all of the elaborate choices,  but the crème brulee was the perfect end to our meal.   I left full and happy. I may just have to become a regular.