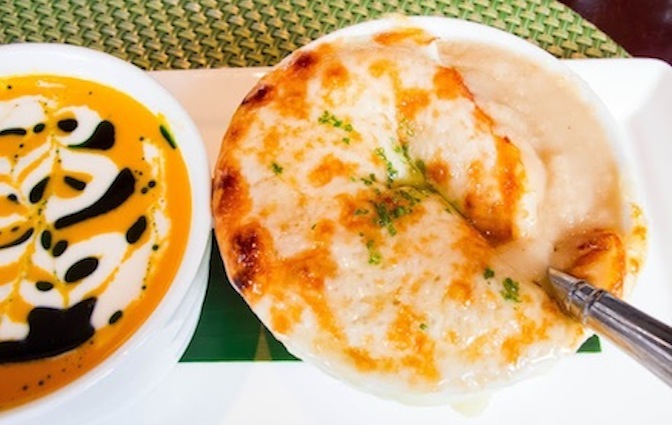 “So, can I bring out a couple of soups for you?” Chef Bill Brodsky had asked when I sat down at City Landing last week. I had been sent there by What’s the Soup to check out their offerings and when I smugly replied, “Bring it!” in response to Chef Brodsky’s question. I had thought their special “duo of soups” ($10) was headed my way and soup spoon in hand, I was ready to dig in. And I sort of thought that’s how the story would start and end, with two soups. But it didn’t. Before I knew it, six (!) bowls of soup later, I was having difficulty buttoning my jeans but my stomach was happy. So let’s get to the soupy details and bowl by bowl replay, shall we?

It’s obvious that there’s a lot of attention to detail and it’s apparent in the service and most importantly in the food. Each bowl of soup I had was carefully crafted and thoughtfully presented. I started out with a duo of Golden Tomato Soup, artfully adorned with swirls of sour cream and basil oil, and the Roasted Onion Bisque. The bisque was dressed up like a classic French Onion Soup would be but under a layer of gooey cheese and pretty little shreds of chives, to my surprise and delight, was a luxuriously creamy sweet onion puree. The Golden Tomato Soup, the Chef explained, was not regularly on the menu but this soup was so popular during the summer, there are regulars that still ask for it. For that reason, the Chef keeps a hidden reserve of this tangy puree on hand. At this point I thought that this was all the soup I’d be having so I heartily (almost) licked the bowl clean. My plate was removed and placed before me was another duo: Butternut Squash and Boston Clam Chowder. Still hungry, I polished off the Butternut Squash Soup, a hearty puree that hit all of those rich, wintery notes of cinnamon and nutmeg with another artful swirl gracing the top. While I don’t care for seafood (I know, I’m a New Englander through and through and it makes no sense) I still found myself enjoying a couple spoonfuls of the creamy soup spiked with buttery diced potatoes, generous portions of clams and a fried clam resting on top. At this point, I thought for sure I was done. 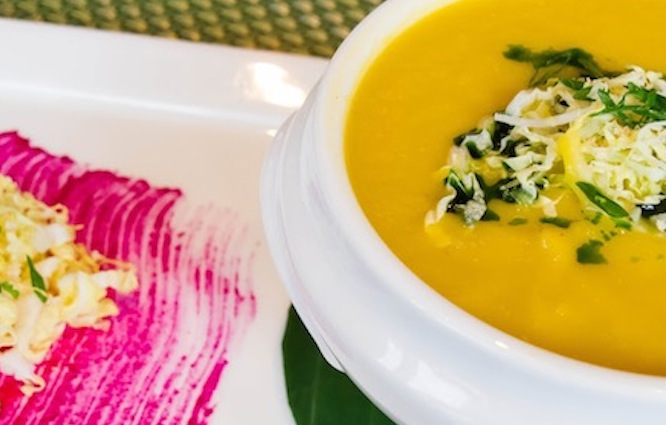 But then a Golden Beet Borscht arrived on the scene, garnished with fresh cabbage shreds on a Beet-Horseradish painted plate and I dug in. The flavor of the cabbage was so vibrantly bitter (and that’s a compliment) in that earthy way that cabbage is, it was balanced by the natural sugars from the beets. “This one is on our regular menu”, Chef explained before placing a Split Pea soup before me. “This one, is one I’m working on for the holiday menu”. By now, I was over my limit but I couldn’t ignore the soup, especially since Split Pea soup has a reputation for being murky this soup defied that, taking on an attractive, slight green hue and topped with crispy black pepper croutons and diced bacon. Bright flavors of pea and pork were apparent and were it not for all the soup beforehand, I would have devoured it. 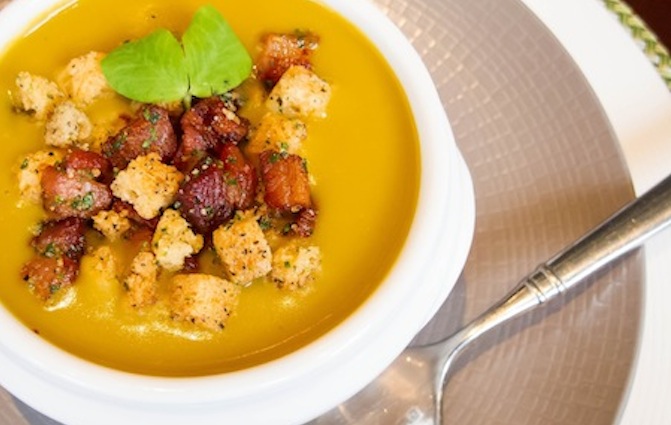 While I had little room to sample anything else off of the menu, I can say that after the tour of soups that I took last week, great things are happening at City Landing. Should you happen to find yourself in the Waterfront area on an empty stomach, stop in for a bowl of soup. At only $6-$9 a bowl or $10 for a sampling of two, generously portioned and skillfully made, you’ll be happy you did.