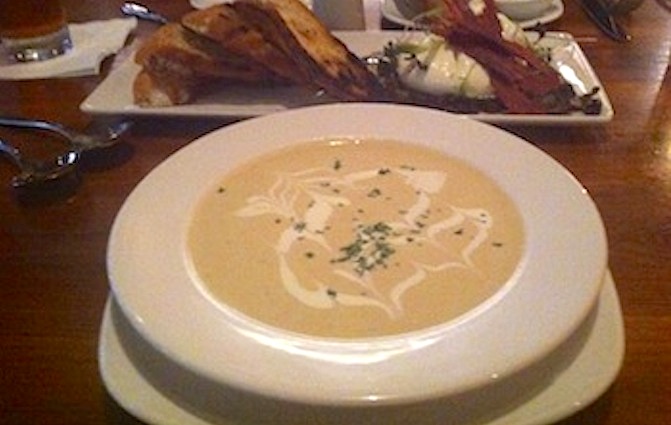 Bar Mingo, home to Chef Jerry Huisinga, is an Italian-inspired spot in Portland’s trendy Nob Hill/Uptown area. It features some of the finest and freshest, small plates I have sampled in the Northwest. It’s site trumpets, “full flavored food that honors the main ingredients at the height of their season.” We were honored to share in the experience.

I haven’t visited the Nob Hill area of Portland in over 20 years and it’s not just hipsters that have replaced the hippies. The Blue Moon Tavern still glows but this area has become quite the up-and-coming hotspot for restaurants.  Bar Mingo, little sister to its next door neighbor Caffé ’Mingo, is the kind of place you will find hipster’s and academics sitting elbow to elbow with the devoted regulars.

Promptly, a generous sampling of Ciabatta from Grand Central Bakery is delivered to the table. I know the bread is first rate as our WST Portland reviewer, Adam Sawyer, featured GCB’s soups and breads previously on WTS’s site, so I was in on the secret. As Miles Davis serenaded us a cheese plate generously adorned with oozing house made mozzarella, raisins, olive oil and bacon arrived. Good bread and cheese? Yes, and I could live on it.

Then there was the soup. As I watched the chef master a fine dance around his tiny kitchen, my bowl of Potato Leek Soup arrived. Upon first dollop I could already smell the intense richness of the leeks and parsley. It was perfectly chilled and was thick enough in consistency to taste the earthiness of the local potatoes. The Crème fraiche was not overbearing with a Jackson Pollock smattering of fresh cream that added a tangy flavor and a bit of a bite (white pepper?)  The authentic chicken stock base evened out the flavor. As I slowly took in these wonderful tastes I begrudgingly passed the spoon to my husband and daughter as they looked on longingly. My daughter devoured the rest and I didn’t put up a fight, as I was still eagerly awaiting a Sockeye Salmon and Arugula dish.

As we sat and enjoyed the atmosphere and the flurry of street activity outside, I leaned over and asked a solo diner next to us if this was her first time here. She smiled and responding simply, “Oh no, I eat here at least twice a week.” This, a reassuring sign, when a solo patron can sit backs and be treated as part of the family. The Salmon was fresher than fresh, cooked to simple perfection and married to the nutty flavor of the arugula.    It was “daughter’s choice” for dessert.  Profiteroles with gelato and warm chocolate sauce barely made it to the center of the table before we were dueling for positioning with our three spoons.