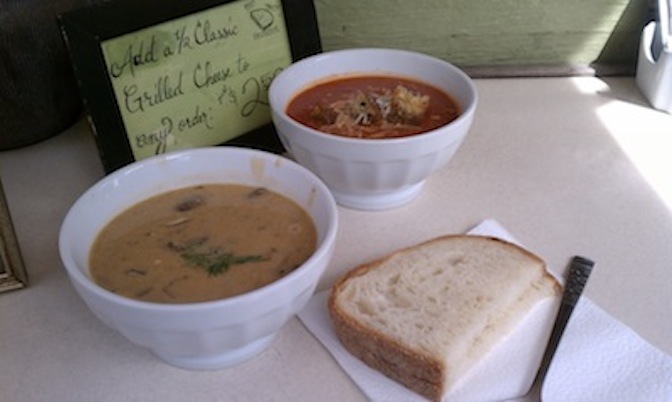 If you haven’t been to Portland, Oregon lately, there are probably some things about our culinary scene that you might not be aware of. For starters, we are the micro-brew capital of the world. Take that Germany! We are also one of the preeminent coffee roasting towns in the United States. And at last count there were over 700 food carts in Portland, making us the food cart capital of the world. “That’s all fine and good Mr. Portland, congrats. But what does any of that have to do with soup?” Patience. First, a high level overview of food carts.

A collection of food carts is known as a “pod” in Portland. Like a group of crows is a murder, a group of food carts is a pod. There is a pod downtown that stretches along Alder Street between 9th and 11th Avenues. This area is the Major Leagues for food cart owners. Competition is stiff here, and only the best stand the test of time. At the corner of Alder and 10th in the heart of this culinary version of natural selection is the Savor Soup House.

The Savor Soup House (SSH) has been in this prime location for almost three years now; serving up a rotating menu of house made salads, sandwiches, and of course, soups. While others have fallen by the wayside, the SSH continues to cultivate a large and avid following. Another big part of the Portland food scene is keeping things fresh and local. The SSH certainly adheres to that commandment of Northwest cuisine. They source from a list of local vendors that inlcudes the Portland Farmer’s Market, which is literally blocks away, and Morgan’s Landing Farm on Sauvie Island.

On the day I visited there was a steady flow of customers. Owner and Chef, Nancy Ettinger, was going about the business of creating soup stock at the stove while her friendly and efficient staff tended to the soup and sandwich needs of the business suit-clad lunch patrons. 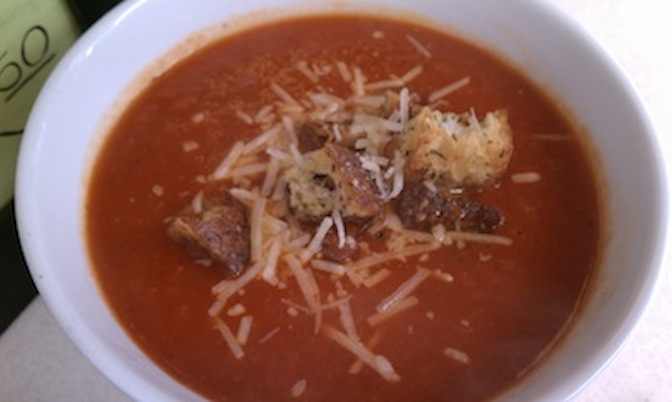 was given two soups to sample. The first was Tomato with Fennel and Orange topped with Croutons & Parmesan. This soup tastes like summer feels; and on that sunny spring day had me yearning for 20 more degrees of Fahrenheit and a pair of shorts. It had bright flavor and an engaging texture that made it a joy to eat slowly. The second soup was their Hungarian Mushroom. Topped with fresh dill, this creamy cup of joy is advertised as one of the SSH’s best sellers, and I understand why. It was rich without being overindulgent and enlivened multiple tastes. The mushrooms in the soup were plentiful and cooked to perfection; just enough to give the soup what it needed flavor-wise while maintaining structure and fresh flavor.

I lead Epicurean Walking Tours around downtown Portland for a living. Whenever people ask me where my favorite place to eat is, I always say “Food carts”.  The Savor Soup House is a prime example of why that answer won’t be changing anytime soon. 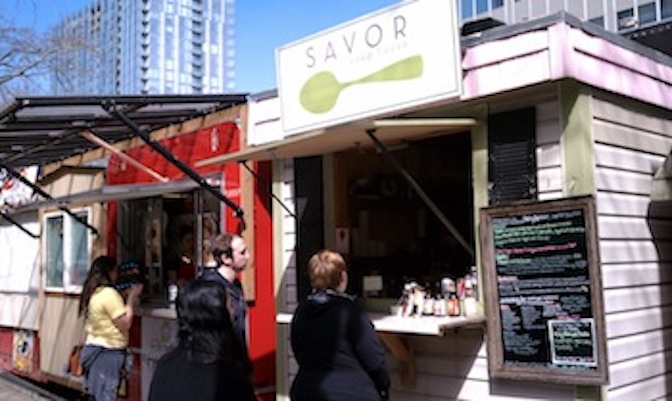