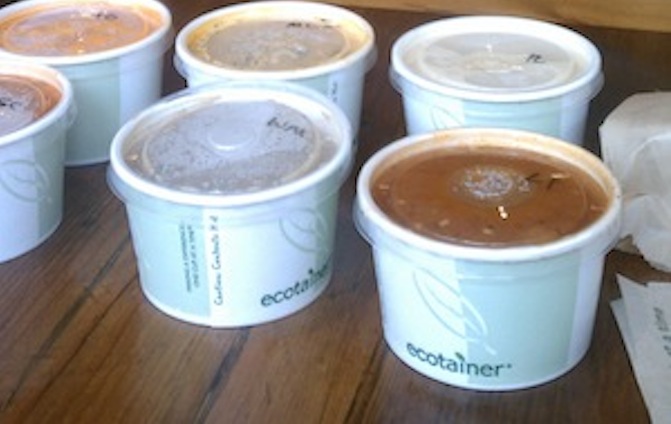 I’ve got it! “Disney World for Foodies”. That’s what Elephants Delicatessen is. I’ve been churning on what sums up this specialty food store/ full service catering company/ banquet space that also produces local foods from scratch daily, and does it all with an environmentally friendly business model and impeccably efficient and friendly service. Yep, “Disney World for Foodies” will do just fine. A Portland institution, Elephants Deli has been serving the Rose City since 1979. I recently visited their shop on NW 22nd Ave, one of six locations strewn about the Portland area, to sample some soup.

I met with manager Nick Doughty who gave me a jaw dropping tour of the facility, and shared some of his personal stories about working at Elephants Deli. It was apparent that the Deli’s roots run deep in this North West Portland community. According to Nick, it’s not uncommon for the Deli to ship out quarts of the “Elephants Cure” soup all across the country to college students during flu season, as well as students raised in Portland who might be suffering from a bit of homesickness. In an area of the country that cares greatly for its community, as well as the environment, the Elephant Deli echoes the concerns of its customers with their triple bottom line; “People, planet, and profit are our measurement for success as we grow our business”.

Eventually it was time to get down to some serious soup tasting, and Nick obliged me with 6 samples of freshly prepared belly warming goodness. First up were the two cornerstones of the Deli’s soup line up: The Tomato Orange and Mama Leone’s Chicken Soup. While it may sound a bit odd, the Tomato Orange might be the best thing to happen to a grilled cheese sandwich in quite sometime. Upon tasting, the soup presents with a bright but subtle orange flavor that finishes with smooth traditional tomato soup flavor. The Mama Leone’s touts a hint of smoked paprika, garlic and tarragon, swimming in a slightly creamy chicken broth topped with fresh spinach.

Next up was the Potato & Leek. A classic soup executed perfectly here, letting natural flavors speak in lieu of sodium. My fourth sampling was of the Lime Tortilla Soup. This spoke directly to my Southwest roots with poblano chilies, garlic, onion, lime juice, and big chunks of tender white meat chicken. The Wild Mushroom Soup I tried next was perhaps the best mushroom soup I’ve enjoyed all year. The cup was brimming with a variety of local mushrooms that was perfectly creamy and perfectly seasoned.   My personal favorite of the day was the chef’s special, a Manhattan-style Salmon Chowder. Envision your standard Manhattan clam chowder but with delicious chunks of Northwest Salmon in place of clams. I’m not sure what magic they sprinkled into this creation, but it was much greater than the sum of its parts.

My visit to the Elephants Delicatessen was an absolute joy, but in the end it left me wanting. Wanting some of that fresh baked macaroni and cheese that everyone was bragging about!