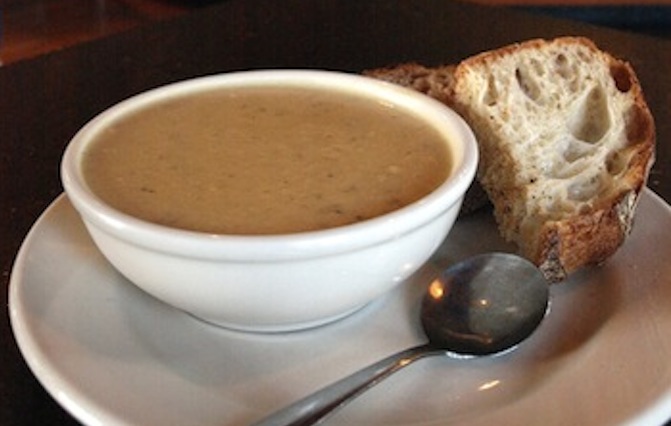 The Grand Central Baking Company (GCBC) is a chain of bakery/cafes in the Pacific Northwest. What started as a small soup and sandwich shop in 1972 has blossomed into a thriving, 9 location (not counting farmers markets) business exclusive to Seattle and Portland. I know what you’re thinking, “A chain?

What does a chain know about good soup?” Well ponder the following: Consider that this chain, in true Northwest fashion, prefers fresh, sustainably grown products that are in season. The GCBC utilizes a long list of local growers and farms to garner the bulk of ingredients used in their cooking. Also consider that they employ some of the area’s most talented cooks to handcraft an ever-changing menu of seasonal soups. Doesn’t sound very chain-like, does it?

In Portland, the hearty seasonal soups of fall and winter are essential tools in the war against the weather. When I visited the GCBC’s Fremont bakery in Portland a couple of weeks ago, the weapon of choice was potato-leek soup.

Potato-leek soup is a straight forward affair. Leeks, onions, potatoes, butter, and cream do the majority of the heavy lifting flavor-wise. That’s why when a soup relies on the flavors of its primary ingredients as opposed to herbs and spices, fresh and local make all the difference. The GCBC vegetarian version has a velvety consistency, complimented by the occasional chunk of leek or potato just large enough to warrant a courtesy chew. Visible flecks of pepper are strewn throughout and the soup is accompanied by fresh baked artisan bread, of course. Perfectly seasoned, the soup possesses just enough salt to bring the natural leek flavor to life.

To be filling enough to be considered a meal, many soups employ a number of accoutrements such as bread or crackers; perhaps even a salad. This is not the case with a soup like potato-leek. I was not just simply content, but full by the bottom of the bowl. I get the feeling that at the GCBC, they’re throwing in the bread just because they know how good it is; and why not? I’d hand out bread like business cards if I could produce a loaf half as good.

The potato-leek soup at the Grand Central Baking Company is a prime example of their basic philosophy. Begin with fresh, locally grown and produced, quality ingredients. Put those ingredients in the hands of local chefs that know how to expertly blend and prepare them. Finally, let the finished product speak for itself.  If you’re still hesitant to try soup from a chain, fine. That’s just more for me. Grand Central Bakery Potato Leek Soup

Recipe from the Grand Central Bakery

This silky soup is so much more than the sum of its parts. At our cafes in Portland and Seattle, we use a well-scrubbed waxy yellow potato and leave the peel on, but you could also use peeled russet potatoes.  The starchiness of the potato determines the texture of the soup, so you may need to thin it with a bit more water or cream before serving. 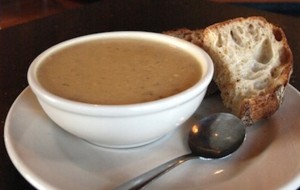