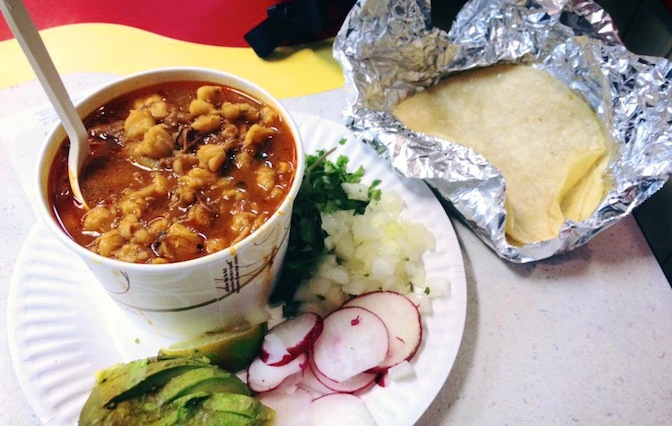 For the last few years, fast food joints have been disappearing all over Seattle. Mirroring other big cities throughout the country, Seattle has been ousting unhealthy and unsightly food chains in an effort to help residents make healthier food choices. While I won’t comment on my feelings about this one way or another, it is always interesting to see what crops up in their place. The Kentucky Fried Chicken on 10th and Pine St. has been one of the last to go in central Seattle. With its closure, most people assumed the building would be shuttered and razed, as usual.

Enter Rancho Bravo Tacos. Adopting the cheap, easy and delicious Taco truck/bus cuisine more popular on the outskirts of town, Rancho Bravo has been a hit in the neighborhood. It’s proximity to the nightclubs and bars along the Pike/Pine Corridor have helped them attract huge late night crowds. I decided it was best to avoid the crowds, pop in for lunch, and try out their brand new Pozole. This Pozole is loaded with pork and whole hominy kernels, served with radish, onion, cilantro, lime and a couple of steaming tortillas, and plenty of spice. There were no ingredients that helped distinguish it from others I have tried; what distinguished it from the rest was that it simply tasted better. It’s both authentic and delicious. It had kick that made my nose run, and was filling enough to keep me content for hours. Definitely recommended for transplants missing good, casual Mexican food, and people who are in need of some sobering up at the end of the night.