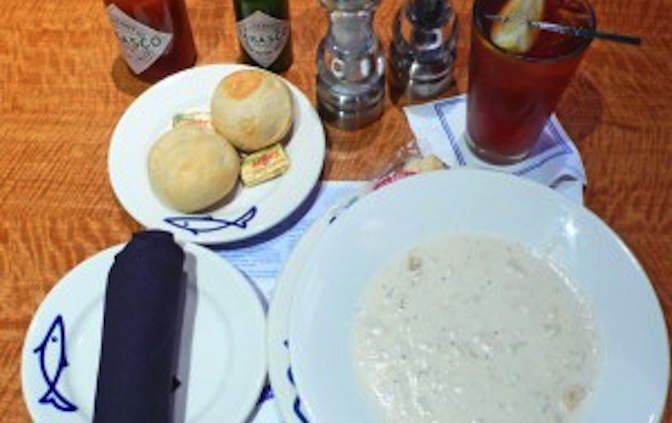 Ever have a rippin’ buzz saw day going that just won’t stop? That’s exactly how my Thursday was going last week – every second of it flying by. And then I popped into the Legal Sea Food restaurant in the Burlington Mall in Burlington, Massachusetts. Very quickly, everything slowed down to a comfortable easy pace. And it’s not that the restaurant wasn’t busy. It was. But it was the atmosphere that got hold of me and let me feel at ease enough to let me catch my breath.

I was seated as soon as I got in, and right away got an idea what Legal is all about: genuine personal service. I saw the manager, David Chambers, stop to talk to customers. And he didn’t do it hurriedly at all. He did it with a smile and an assuring “Welcome to my place” manner. Legal Sea Food is famous for their high food safety and quality standards as well as their dedication to customer service. And it wasn’t just David, but all the wait staff that showed the same attention to detail and personal care. Right after I saw David stop from table to table, I watched (and dutifully overheard) a waitress talk with a customer about how his meal was prepared and how the kitchen could do it differently the next time that same customer came in. The waitress did the most important thing she could: she listened and then responded appropriately, which, from what I could see only a table away, left the customer fully and comfortably satisfied.

And, all this for me to take in and enjoy – without even having had a bite to eat.

Well, I was at Legal to try the no-kidding world famous clam chowder – it’s been a staple at the Presidential Inauguration since 1981 (Ronald Reagan’s first term). I ordered the soup and was served by very friendly Joanie who brought the steaming chowder just a few minutes later in a beautifully wide white bowl along with a small side plate of freshly baked sour dough rolls. Joanie asked and I let her bring tobacco sauce, which came to the table in both the traditional red and newer green version. David stopped by to ask if I’d ever tried the green, milder Tabasco. I never had, but told him I would. He left smiling saying he’d be back.

I’d expected good chowder, and this chowder was excellent! It was full of fresh, sweet clam pieces and diced potatoes. The white soup base was creamy, gently spiced with herbs to compliment the clams and velvety in texture – definitely neither runny or too thick. All the flavors came together very simply and satisfyingly. I tried and very much liked the less vinegary green Tabasco sauce with the warm sour dough bread and chowder. The combination was pleasantly warmly spiced and fully flavorful, which always brings on a big smile with me. David came back as promised, and we talked easily not only about the Tabasco and the chowder but also about how Legal stays current in the market by always paying attention to their customers and how their tastes both stay the same and change. Enjoying great, fresh chowder and seeing a business do what Legal does gave me another good reason to smile inside and out – just as it should for you!