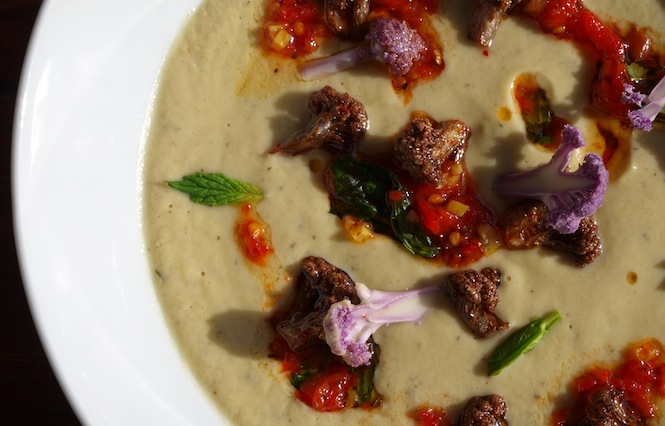 Chefs in Portland, Oregon can get a little experimental. In a town known for its creative culture, you can find anything from food carts that serve foie gras, to fine dining establishments that serve gourmet tater tots; and fusions of any and every conceivable combination.

But in a town with a culinary scene that is bursting at the seams with excellence, it doesn’t matter how original, creative, or experimental your food gets if it’s not delicious. When it’s all said and done, if I don’t want to lick the plate clean, I’m probably not coming back.

The marriage of flavor profiles and cooking techniques that are among the most lauded in culinary history produced a soup that was a worthy and just representation of both. The richness of French cuisine was highlighted with splashes of bright Middle Eastern flavor. If what the dietary experts say about eating lots of colors is true, then this bowl of soup will go a long way towards keeping me out of the doctor’s office. Reds, greens, and purples in a variety of shapes and textures danced on top of the soup’s creamy canvas in a way that made the bowl a joy to photograph while simultaneously producing an enviable mouthfeel in each spoonful.

The idea of creating Middle Eastern and North African dishes with French technique certainly sounded great to me when I first heard about Levant . But again, if it’s not well executed, if it doesn’t taste twice as good as the idea sounds, it’s not going to make the cut. Not in Portland anyway. Based on my dinner, Chef Snyder is well on his way to ensconcing himself into the Portland culinary landscape. My tongue-cleaned soup bowl should attest to that.