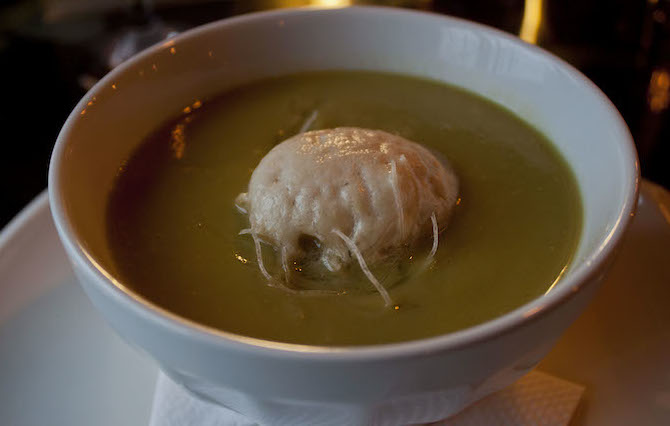 Okay, okay, at some point, Seattleites will stop talking about it and move on to other things—but we kinda still just won the Superbowl, and it kinda still feels pretty awesome. So, I was more than happy to take a trip down memory lane to go to SoDo (where I watched the game and set off on a tour of the city’s celebrations) to check out Gastropod. Even the menu, which changes every week, reflected the city’s victory, offering Legion of Boom Stick Oysters. But Chef Travis Kukull’s Seattle pride runs even deeper—another dish on the menu was named after Seattle rapper Nacho Picasso.

SoDo is full of operating and not operating warehouses, some converted to spaces holding art studios, restaurants, and businesses. Gastropod occupies a small space in the KR Trigger Building. The restaurant holds only 33 people, but the space doesn’t feel small. It feels more like you’re inside a seaside cabin or a boat where a salty sea captain is out on the deck.

The restaurant is an extension of Epic Ales, a nanobrewery in the same building—which has an ever-changing list of unique, diverse beers and sours made with things you didn’t know that beers could be made with. Epic Ales is owned and operated by brewer Cody Morris, who runs Gastropod with Travis Kukull. Together, they pair the food at the restaurant with the beer from the brewery.

So, the soup I had, you won’t probably be able to get it. And maybe not the beer either. And I’m sorry, because they were good. When I went, they were offering Japanese sweet potato and green garlic soup with fried rice noodles and a wasabi and vinegar foam. The soup was creamy and spicy with the vinegar providing a biting aftertaste. The garlic wasn’t overpowering, but balanced well with the other flavors. Over the course of eating the soup, the fried noodles softened, adding a different texture. I ordered a Tetrapod, a Belgian amber with orange blossom, chamomile, and lavender. My pairing hit the spot. It wasn’t as victorious as our epic win, but it was still real satisfying.

Gastropod is open Tuesday through Saturday from 4pm to 10pm and has dollar oysters every Wednesday.