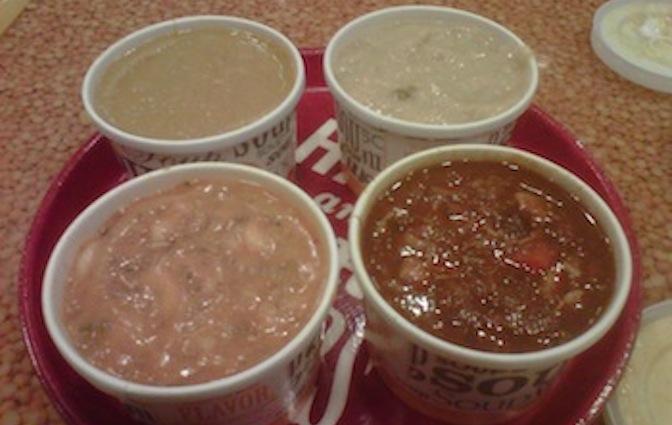 New York’s Hale and Hearty Soups chain is not likely a Valentine’s Day hotspot for couples looking to celebrate Cupid’s handiwork. This soup/salad/sandwich shop is more focused on serving fresh soups “made from scratch using only the finest ingredients” to lunchtime hordes of 9-to-5ers.

It’s utilitarian – complete with crowd control barriers – and with 28 locations, you won’t mistake it for a local cafe. But it’s not fast food either. With the ability to sample soups before you buy them and make your own salads, it’s like quick-serve with a slightly more upscale feel. Case in point: Touches like jazzy music and what appear to be actual lentils pressed underneath glass on the tables give you the sense that this is the Avis of soup chains in that it “tries harder.”

You’re certainly spoiled for choice at Hale and Hearty.

For those who appreciate routine, it offers Everyday Soups, a selection of six soups – like Cream of Tomato with Chicken and Orzo and Tuscan White Bean – that are available day in and day out.

For the more adventurous, Today’s Specials – a far more extensive selection – rotate daily. What’s more, a Monthly Special soup – typically a customer favorite – is available everyday for a month. (Today’s Specials tend to run out in one to three days, according to Hale and Hearty’s Marketing Manager, Alison Ulrich.)

Hale and Hearty also incorporates easy-to-read letter designators for dietary restrictions, making it simple for anyone with specific nutritional needs to pinpoint the right soups.  I was able to sample four of Hale and Hearty’s roughly 25 available soups. There might have been a time I’d have felt embarrassed to sit alone in a restaurant with four bowls of soup in front of me. But as a pregnant woman, shame is a relative term, I guess.

My favorite of the foursome was Split Pea with Double Smoked Bacon.

I’m typically a big fan of “stuff” – i.e., I like to see a lot of components in the bowl. But Hale and Hearty’s Split Pea had no such stuff. It was simply a very creamy-looking green puree. Nevertheless, a smoky bacon flavor immediately came through and it had a certain richness that made it very thick and comforting. I could have easily eaten a lot more – see above – but I had three other soups to try.

Ulrich said Charleston Crab is popular because it is the traditional version with cracker bits.

From the get-go, you can certainly smell the crab and actually see threads of crab throughout the soup itself. It had much more going on visually than the Split Pea – lots more stuff! – although I’m not sure I detected any of the infamous cracker bits. It did, however, have a nice little kick to top off the crab and was smoother overall in texture than the Split Pea soup, which had an endearing lumpiness.

The most adventurous soup I sampled was the Moroccan Chicken. It’s a soup that looks more like a stew with carrots, beans, potatoes, etc. Before you try it, you can sense all the spices, which, as the name implies, I suppose gives it a bit of an exotic feel. On the third bite, I thought I could perhaps detect apricot as well.

With all its components, Moroccan Chicken is a soup with a different mouthfeel than my two previous samples and I got the impression this soup is for the adventurous. In other words, it’s a soup for a day you’re feeling more hungry and daring rather than one to seek out when you just want something comfortable and familiar.

The final soup, Macaroni and Cheese with Beef, is like a hybrid soup/pasta — almost like a cheese soup with noodles. Indeed, this very thick soup was mostly cheese. If you’re hankering for the childhood staple, this is a good option.

Overall: Any New York soup lover looking for a quick bowl is bound to find something here. But because it’s New York, you can expect to pay anywhere from about $3.50 to $9.00 a bowl, depending on size and variety.