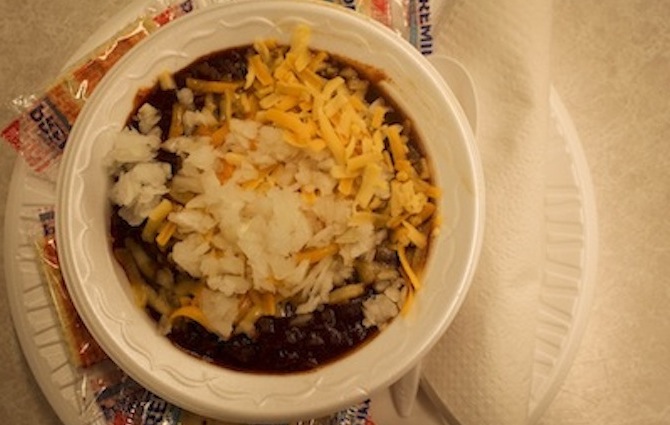 Ben and Virginia Ali opened Ben’s Chili Bowl in 1958 on DC’s U St Corridor. And it’s stayed open through the good times and the bad. Back in its heyday, the U St Corridor was known as “Black Broadway”—the Lincoln Theater and other clubs located there brought in performers such as Duke Ellington, Ella Fitzgerald, Cab Calloway, Billie Holiday, and more, and they all hung out at Ben’s Chili Bowl. Bill Cosby was a regular and even courted his wife there in the 1960s. To this day, Ben’s has a sign that says that Bill Cosby is the only one who eats for free (though, recently, the Obama family was given the extreme privilege of joining that club).    The restaurant weathered the turbulent 1960s and 1970s and the construction of the U St metro stop, which caused many businesses in the area to close down. It hung on through the more recent revitalization of the area, with new restaurants and clubs opening up all the time, to become a DC landmark.

When you enter, though, you’ll notice that the place has not changed much since 1958. The counter, booths, and stools are all the same as they were when it first opened. The walls are covered with pictures of celebrities and Ben and Virginia. You could spend a lot of time identifying all the celebrities on the wall, trust me, I know. At 6:30, when I got there, DC’s professional set were filtering in, joining friends there after work. A tourist leaned over me to take a picture of a picture of Bill Cosby. Ben’s fills up in the evenings and on the weekends it’s crazy busy, as the crowds out on U St for the evening come to get a reasonably priced late night snack like cheese fries or Ben’s famous chili half-smoke.   Vida, Ben and Virginia’s daughter-in-law, greeted me warmly as I sat down with my bowl of chili and milkshake. Despite her sweet demeanor, she would not tell me any of the secrets of Ben’s delicious chili, and I tried every trick I could think of. I can tell you that, according to their website and my observations, the chili has beans, beef, and green peppers (though when I asked if they were jalapenos, Vida would neither confirm or deny). 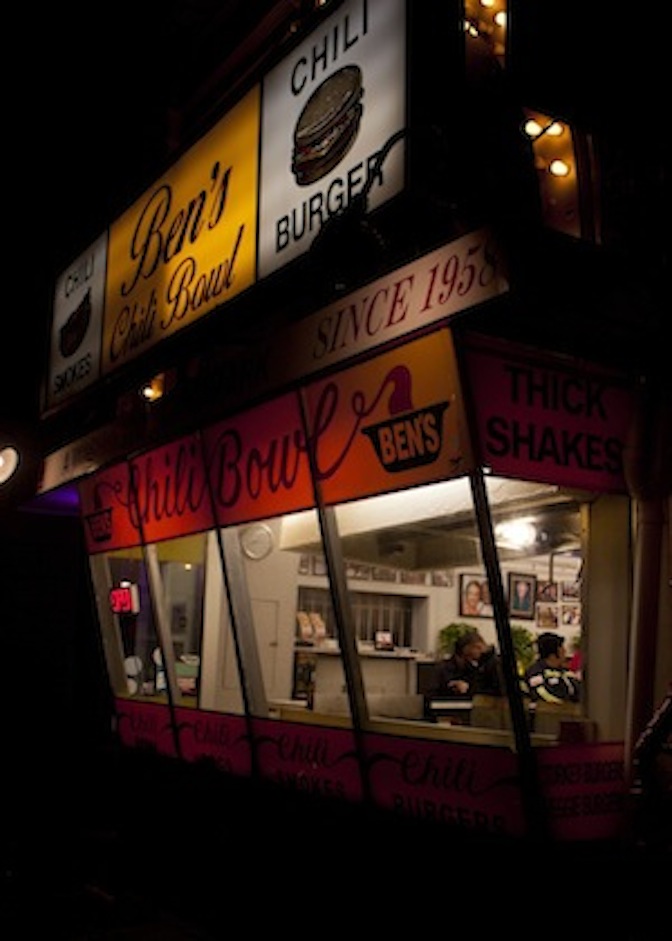 Outside Ben’s Next Door

She told me a story about a chef who sat at the counter at Ben’s for hours trying to figure out one of the spices in the chili. Bowl after bowl, he still couldn’t put a handle on it. And no matter how much he prodded, she wouldn’t let out a peep. The meat, beans, and peppers all come together with the mystery seasonings to create a flavorful hearty chili that you will finish quickly.

The chili is spicy in just the way I like—it permeated every bite of the soup. Hot, but not overpowering. The spiciness of the chili did have me reaching for my milkshake, but that’s all the better because the milkshake was delicious too.  For those who can’t eat the meat version, Ben’s has a vegetarian chili available using the same secret recipe base, and they also offer veggie dogs with chili, so no one has to feel left out.      In 2008, Ben’s Next Door opened, well, next door to Ben’s. When Rob Rollins, the manager escorted me in, it was like entering a completely different world, but with the same comfort of Ben’s. Ben’s Next Door has a classy bar vibe when you step in the front. Walk past the long bar with LCD TVs that play sports and tall bar tables, and you’ll see the restaurant open up, revealing a nice, big space with upstairs and downstairs table seating. That’s where Ben’s Next Door hosts “Live at Next Door” every Tuesday, showcasing independent musicians and continuing a long tradition of live music on U St. Ben’s Next Door also gets packed on the weekends, starting with brunch (that includes waffles and fried chicken) and ending with late night snacks (that includes mac and cheese and classic Ben’s fare, like chili cheese fries) and drinks. 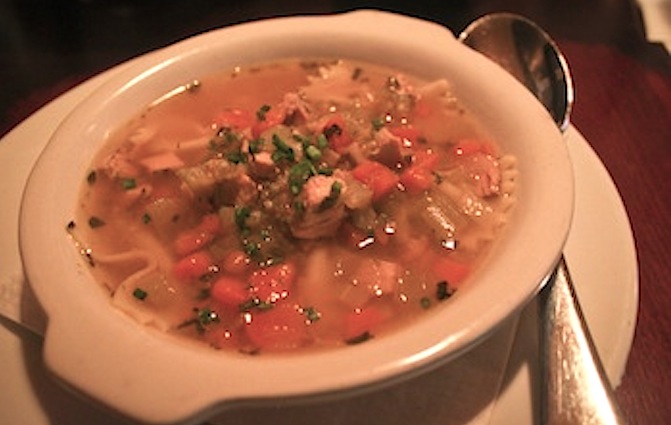 I had the honor of trying three different soups. Rob told me that he felt a little sick earlier in the week, and he tried to eat chicken noodle soup out of a can to feel better, but it was no substitute for the chicken noodle soup from Ben’s Next Door. As the menu advertised, the soup was “grandma good.” Bowtie pasta, vegetables, and chicken—with a little kick of heat from an abundance of pepper. Next, I tried the soup of the day, which was a black bean soup over a mound of white rice, topped with chunks of half-smoke from Ben’s Chili Bowl. Each bite was a nice mixture of the textures and flavors of each element. The saltiness of the half-smoke rose above the subdued, but flavorful black bean soup, all mingling nicely with the rice. And finally, I got a bowl of the She Crab Soup—a creamy crab bisque topped with crème fraiche. The chunks of crab hidden under the silky soup were plump and tender. Basically, you can’t go wrong ordering a soup at Ben’s Next Door. 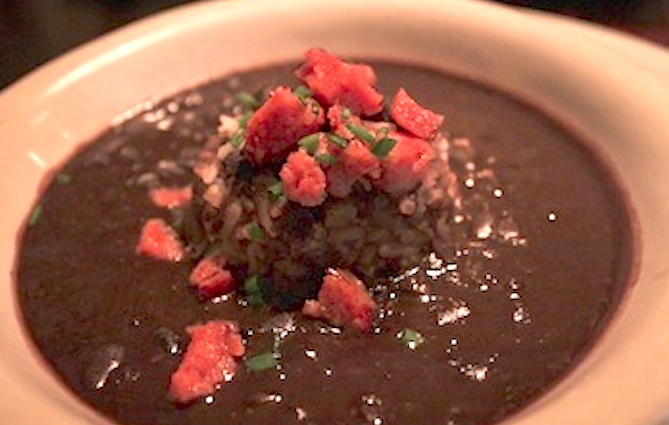 Whatever you’re in the mood for, Ben’s Chili Bowl and Ben’s Next Door have something amazing to offer you. Check them out next time you are on U St. Or take a special trip, it’s worth it.