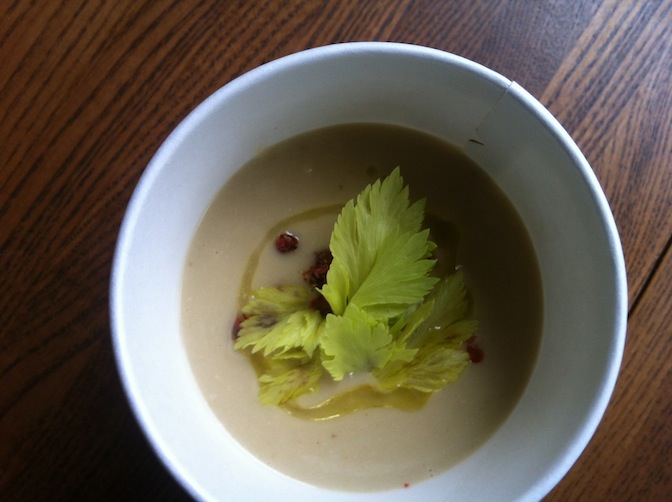 Brothers Kevin and Ryan McGuire of Pennypacker’s Fine Food have built a solid reputation on Boston’s burgeoning food truck scene. Now they’re ready to open their first brick-and-mortar location, and we were lucky enough to get a preview the day before their grand opening.

They’ve found a funky, no-frills shop in Somerville’s Magoun Square, with a couple of tables and a stand-up counter (where there may be stools by opening). Kevin, the business side of the team, graciously takes time from a discussion with his signage/lighting guy (there are a lot of hoops to jump through when you’re opening your own place) to fill us in on Pennypacker’s history and goals.

Kevin says the decision to add a storefront just makes sense. Since they started their food truck two years ago, they’ve been paying rental, as many food trucks do, to a shared commissary where they did their prep work and a lot of the cooking. Now they’ve put those resources toward their own kitchen, a fixed abode where people in the neighborhood (and farther afield) can stop by to purchase their gourmet salads, sandwiches, and soups. It’ll create additional customers without adding too much to their overhead. They’ll also have presences on both sides of the river now, since their truck can usually be found near the Design Center in the growing Seaport district. Magoun Square might not be foodie central (yet), but the economics work out well, and they can provide high-end food at a reasonable price.

I’ve often wondered why more food trucks don’t offer soup. To me, it seems like a no-brainer to have a big pot of something delicious that bubbles all day on a back burner. Pennypacker’s has been unusual in that they’ve featured soups that change daily on their truck for quite a while. Chef Ryan keeps soups on the menu because they’re fun; even within his established recipes, he likes to improvise with what’s freshest and available.

Perfect for autumn is Celery Root and Apple Soup. This purée is so flavorful I could have sworn it was made with chicken stock, but it’s vegetarian. (Ryan clearly knows his way around a stockpot.) Warm sage blends with the earthy celery root set off by a touch of sweetness from the apple. Because they’re mostly a take-away outfit, the soup comes in a simple paper cup, but the boys don’t ignore presentation. There’s a pretty sprinkling of crushed pink peppercorn, a drizzle of olive oil, and some delicate celery leaves as a garnish. The pepper provides crunch and a little bit of heat, and the best bites come with those celery leaves, which bring the vegetable flavors to the fore. 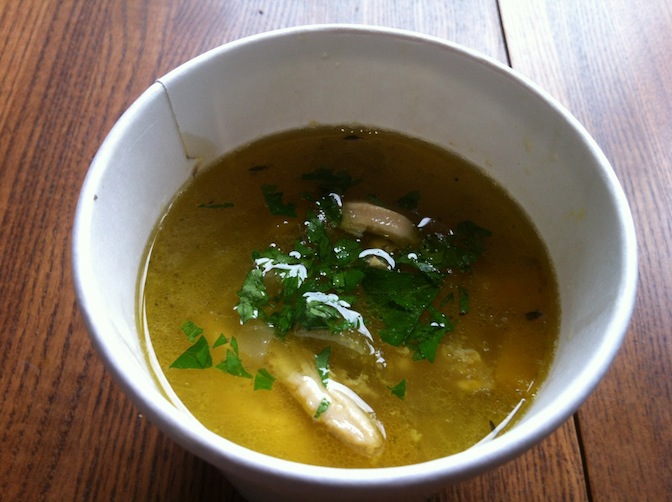 I also get a sample of Chicken and Butternut Squash soup. This is a classic chicken soup with lots of celery and white-meat chicken swimming in an unctuous broth just like mama’s. Cubes of tender butternut squash give a textural contrast, even if their sweetness gets a little lost in the highly-seasoned stock. Piping hot, it’s a welcome bowl on an unexpectedly wet and chilly afternoon.

By the time you read this, the joint will be up and running. I envy the folks who live in the neighborhood: this is the kind of place it would be great to have on the nearest corner. For the rest of us, it’s worth braving the twisty streets of Somerville to spend some time with the McGuire brothers and their tasty sandwiches, salads, and (most important!) soups. 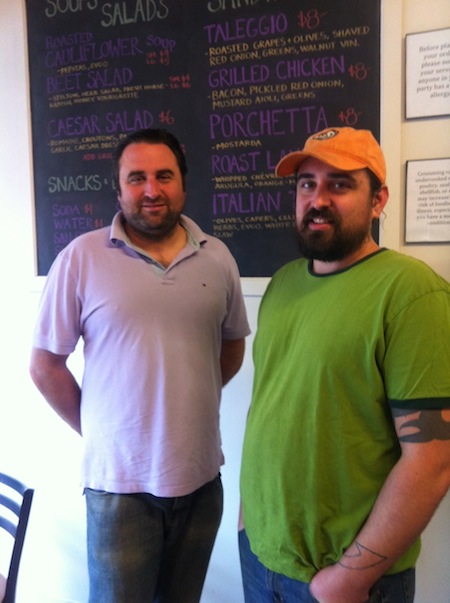