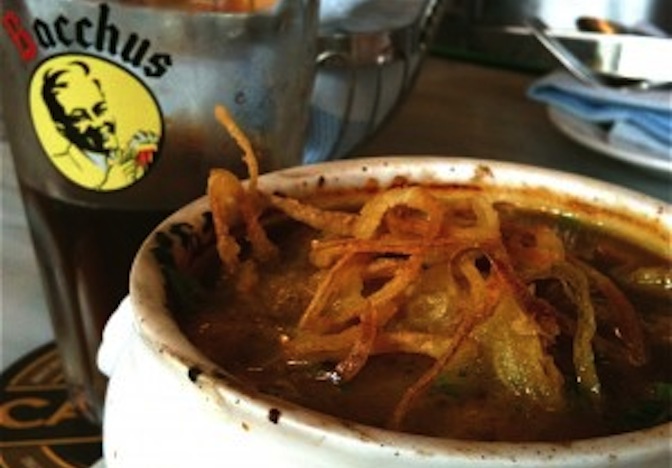 I begrudgingly conceded to the autumnal equinox with a big bowl of shallot and onion soup at DC’ s Brasserie Beck. One needs comfort food when faced with the end of summer…when we say goodbye to long days and hello to dead leaves, when we pack away our gelato spoons and bring on the braise. As the song goes: “To everything—turn, turn, turn/There is a season—turn, turn, turn/And a time for every purpose under heaven…” Since it’s unlikely that my father’s family descended from birds, we’ve long acknowledged our agricultural roots (a Thrasher is a mechanical reaper used to gather grains—what Neil Young called “the aimless blade of science”), which is why I’m all the more surprised by my melancholy. Shouldn’t I be wired for this holiday o’ harvest? Why do I have more in common with a mocking thrush? Let’s just say, I get that from my mother.

But just when I thought I might double up on the Xanax, Chef Wiedmaier’s homage to the allium arrives and I know it’s going to be alright; I remember how much I love these earthy flavors. His version of onion soup had a beautiful, earthy, meaty broth and lots of it; five different types of onions added wonderful flavor and substance, but not so much as to remind me of bread pudding; there were wisps of cheese hanging from the spoon, but not the usual tentacles that take a relentless hold of your chin; there were bright green strips of scallion; and it was all topped with—not cheese—crispy fried shallots. Let’s face it, more often than not French onion soup is a menu’s siren song sunk by its execution: a bowl of something that looks like it once clogged a street drain, barely any broth and a greasy puddle of melted cheese recongealed with a spotty crust. And speaking of clogged pipes… With my soup, I enjoyed a tasty draught of Bacchus Oud Bruin—a dark brown Flemish beer matured in oak casks, which gives the beer a wine-like taste with a bit of an acid finish (hence the tag line, “met wijnsmaak”…with wine taste). Thanks to the bartender, it paired beautifully.

If you’re not lucky enough to have a Belgian brasserie in the neighborhood (or, God forbid, you don’t like beer), red wine drinkers will enjoy French onion soup with Beaujolais, Côtes du Rhône or a Chianti. Because onions are sweet, personally, I like a wine with a bit more acid to balance the two so I might go for a Sauvignon Blanc from the Loire. In Thomas Keller’s beautiful book, Bouchon, he dedicates four full pages to Onion Soup (“The more basic the soup, the more critical the details.”). The team at Balthazar instructs us to spill a little red wine into the bottom of our near empty soup bowl, swirling the wine and hot broth, and gulping it down. “Tradition does not dictate doing all of this while undressed, but rumor has it that it makes the soup event better.” So, if you’d rather be a Soup Nude than a Soup Nazi, pick up some onions at your farmer’s market this weekend and try these recipes on for size instead.